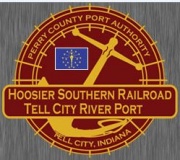 The Hoosier Southern Railroad is a short-line railroad owned and operated by the Perry County Port Authority (PCPA) of Perry County, Indiana.

PCPA's goal in obtaining and putting the Hoosier Southern line back into service was (and is) to attract new industry to Perry County. When Waupaca Foundry announced plans to build a facility just north of Tell City in 1995, the Port Authority undertook construction of a spur to that site. In 1996, an additional 2.4 miles of trackage between Santa Claus and Lincoln City was added to the HOS system. This trackage was also purchased from Norfolk Southern.

Combined with the Tell City River Port on the Ohio River at Tell City, the Hoosier Southern provides multimodal transportation to serve the needs of businesses in both Perry and Spencer counties.

The railroad interchanges with NS in Lincoln City, Indiana.