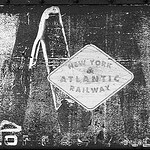 Looking for some info on some local stuff, and I cant say I know where to start.

Does anyone know when the CK&S to Richland was removed? It appears to have been there until the late 1960's.

Where it gets interesting - the line only went about 1/4 of a mile past Richland Junction (the diamond with the interurban), essentially a tail track. The interchange and former interurban is still in place, going East into town, and West a short way.

So I guess the question is this - did NYC/PC leave this chunk of trackage in, and utilize the former interurban to serve something in Richland proper?
Top

I used to live in Richland from 2015 to 2019. A few years ago, I spoke to a guy that has worked at the Richland Hardware Store since the 1980s and he said they used to get railcars of lumber in the 1980s. Now my assumption is the early 1980s vs. the late 1980s, but I can't say that for sure. He said "1980s", so that is as close as I can get. The North-South line to Richland Jct. from Kalamazoo, and the piece to Richland itself, must have still been there in the early 1980s.

I believe the early 80s is accurate for track removal. The track also went west to Doster Lumber. I think I remember seeing track there in the early 80s, but it was probably earlier. Abandonedrails.com said Penn Central stopped service in 1973.
Trails to Rails. Put the track back.
Top

Thanks guys, exactly what I was looking for.

I wonder if there are photos out there since it lasted so late..
Top

The Michigan Railroads site shows it was abandoned in 1978, which sounds about right to me.
The line was served by Conrail, but under subsidy, north of the James River plant in Parchment.
The line to Doster/Richlard was known as the "Richland-Doster-T", due to its appearance on maps.
Top

I wonder if there are photos out there since it lasted so late..

This photo is from michiganrailroads.com. I believe the view is to the North with the CK&S on the left,