What did I buy this time? How about a HO scale replica of D&H RF16 Baldwin Shark #1205! Yep, I was at the Great Train Expo today at Rock Financial and found that Bachmann in their new run of the Baldwin RF16 has made the #1205 in stunning detail with their "DCC on Board" Series. They even made her sister the #1216! Now, I have to go find one. For all those who model the MIGN after they were bought from the D&H, this is a must have! Can't wait to see it running on the SH&W!

Even though they were designed to be road freight engines the Class 1's primarily used them in intercity transfer service. IIRC they had large traction motors that made them well-suited for heavy tonnage at low-speed service.

They are also available in O gauge.
Top

AARR wrote:Even though they were designed to be road freight engines the Class 1's primarily used them in intercity transfer service. IIRC they had large traction motors that made them well-suited for heavy tonnage at low-speed service.

Um not sure where you got that from Don, PRR used theres all over the system in fact they made quite a few runs up to Detroit , and MGN used theres in heavy haul coal service.,
http://www.railpictures.net/showphotos.php?userid=9609 My photos at RailPictures.Net!
Top

AARR wrote:Even though they were designed to be road freight engines the Class 1's primarily used them in intercity transfer service. IIRC they had large traction motors that made them well-suited for heavy tonnage at low-speed service.

Um not sure where you got that from Don, PRR used theres all over the system in fact they made quite a few runs up to Detroit , and MGN used theres in heavy haul coal service.,

Model Railroader Cyclopedia Diesel Locomotives Volume 2. Ironically, the picture in this book shows them hauling some sort of raod freight

I thought they were used in other services too which is why I didn't say "exclusively in intercity transfer service".
PatC created a monster, 'cause nobody wants to see Don Simon no more they want AARR I'm chopped liver, well if you want AARR this is what I'll give ya, bad humor mixed with irrelevant info that'll make you roll your eyes quicker than a ~Z~ banhammer...
Top

I have both numbers (not for sale). I model the E&LS officially, but got #1205 anyway, even though it never ran on the E&LS. Are you planning to paint over the lettering to match the MIGN units? There was a small "D&H" added to both sides where it used to say "Delaware & Hudson". I can provide you with good photos if you would appreciate them. I would have to disagree with the "detailed" comment, especially when park next to my Proto 2000 FA-2's.

PS The rest of my E&LS stuff consists of 1970's boxcars, modern pulpwood cars, and a mix of other related stuff.
Top

Thank you for that info Mr. Moellendorf. My RF16 pair will probably get some weathering, but will stay as they had just arrived on the MIGN from the D&H. Both of these units were transfered to the E&LS in 2 shipments aboard Chief Wawatam from Mackinac City. 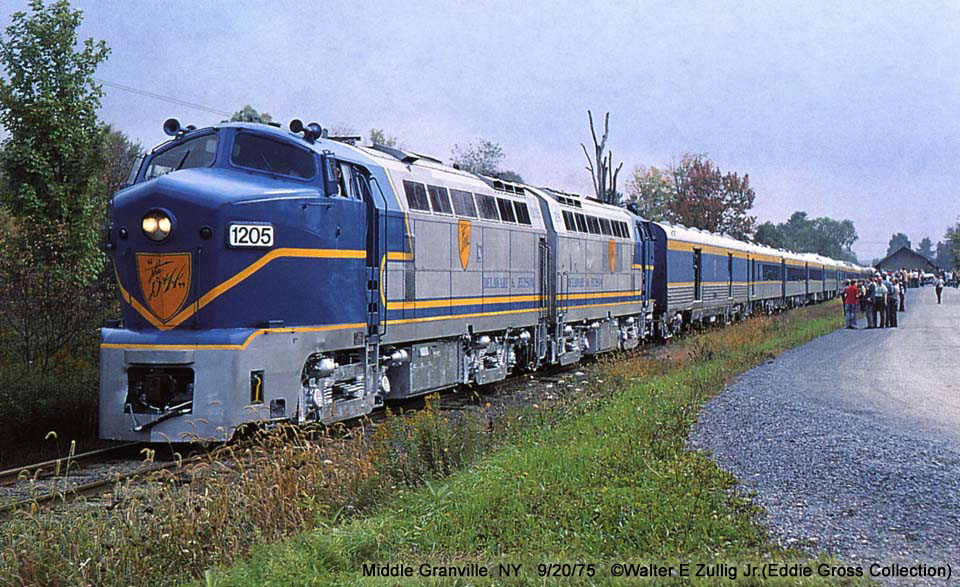 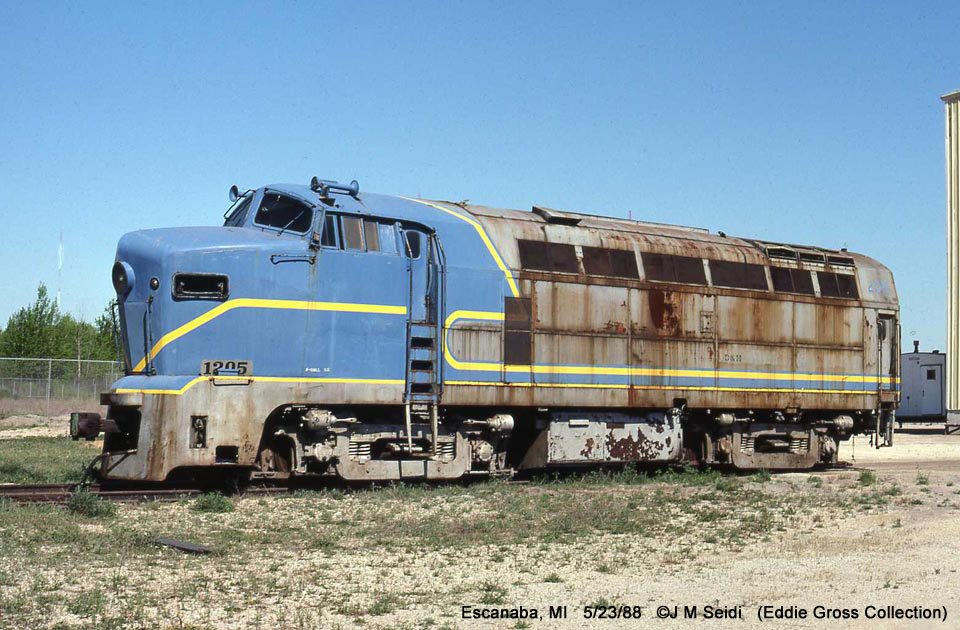 The REAL reason I love these 2 locomotives is I was on another railfan forum and posted questions about these last 2 RF16's. Mr. Alex Huff the VP Of Operations for MIGN gave us a full rundown of their history on the MIGN and their transfer to the E&LS. The story WAS posted at the Baldwin Diesel Zone. But in order to have a back-up here:


Why we leased them and what happened to them. What follows is based on my memory of nearly thirty years ago, I was MIGN's VP-Operations (big title, small railroad) at the time.

Michigan Northern started on April Fool's Day, 1976 between Grand Rapids and Mackinaw City, MI on ex-PRR (nee GR&I) track which was not included in Conrail. The state of Michigan leased the track from the Penn Central trustee and subleased the line to MIGN. We started with two secondhand RS-3's, our second choice. First choice was three ex-GM&O RS-1's, but ICG wanted too much for them. Because of the 244 engine, the RS-3's were considered expendable, just run them to major failure which was usually a failed crankshaft due to fuel dilution in the lube oil. In the winter of the first year we purchased an RS-2 from the Green Bay & Western. Under pressure from the state to increase carloadings or see the railroad cut back, we chose to not take a general rate increase of rail freight rates. This was before deregulation in 1980. This greatly annoyed the major railroads, since our flag out did not apply to just MIGN but all railroads in the route. Bottom line, it was cheaper to ship lumber from the west coast to the east via MIGN than via Chicago. Business picked up considerably and we were in the market for more power. Conrail was leasing just about everything that had an EMD prime mover in it, so we were priced out of GP's. CNW was selling off some of their Alcos wth 244 engines at a price we could afford, so we bought two RS-3's. Later, we went back for more, but the last four RS-3's had been sold to Craig Burrough's Erie Western. CNW still had some unwanted RSD-4's and RSD-5's but we were reluctant to take on the six axle trucks. In hindsight we should of bought them.

With EMD's out of our price range and no Alco's we knew about available, we took what was available, the two Sharks. (I know, you thought I would never get to them.) A serious consideration was the "railfan" aspect of running the last two Sharks in existence. However, after having been assured by the D&H that the Sharks were in good condition (they weren't) and that owner John Kunzie (Castolite) was willing to lease them for $100/day of use only, and we were pretty desperate for power, we took them on.

We knew going in that the air throttle system would not MU with the Alco's and soon figured out which air control valves would stick by looking at the scars on the valve bodies where D&H crews had thumped them with whatever was handy. D&H had purchased replacement parts from a company in Belgium which had acquired the 600 series engine design. There were reliability issues with some of these parts. One unit had a head failure and our Master Mechanic, ex-PRR Wade Plummer, took the head off, bolted some straps over the liner to keep it from walking out of the block, left the piston connected so as to not unbalance the crankshaft and fired it up. There was a slight water leak so when you peered into the bore and watched the piston stroke back and forth, you got mist in your face. There was no significant drop in power while it ran on seven cylinders. I don't recall how long we ran it this way, but it was used in regular service. This unit was scheduled for a major rebuild by John Kunzie, he supplied the material, including new power assemblies and a crankshaft. Michigan Northern supplied the labor, overseen by Fred Cave, the last Baldwin tech rep, by now working for Ecolair, the successor company. Unfortunately, the engine failed due to low oil pressure not too long after it was rebuilt and scored the crankshaft. The unit never operated again. The remaining Shark was often double headed with two Alcos. Because most of the traffic was southbound from the car ferry at Mackinaw City, the Shark would tow the pair of Alcos and the cars (mostly empty). Southbound with a heavier train, the Shark would be towed by the Alcos except on the ruling grades. When the crew needed the extra power, the conductor would go back to the Shark and run it seperately. This unit came to a bad end due to human error. It was the sole power on a snow plow run, pushing a Jordan spreader. The man in charge wanted to turn the equipment at a wye at Walton Jct. which meant the Shark had to tow the spreader around one leg of the wye. The Shark was run backwards into deep snow which packed under the carbody and against the #4 traction motor. The traction motor grounded out. By this time, John Kunzie had had enough of Michigan Northern and arranged to have the Shark with the bad crankshaft repaired at Diesel Electric Services in St. Paul, MN. They removed the prime mover, fell on hard times and folded up. The unit was put back together and both ended up going to the E&LS where John stored them. One unit was operated briefly on the E&LS. I am not familiar with what happened after that, I believe John Larkin/E&LS bought the units from Castolite to settle storage charges. John Larkin has a fairly large collection of Baldwins, of which at least one is still in service as an occasional switcher. John also has a collection of passenger cars, including one of the Skytop MILW observations and probably the only representative set of SOO heavyweight passenger cars. He will not leave any descendants and since the railroad is owned by his family, I think it unlikely that anything of value will be scrapped.

Other trivia, John Kunzie told me he had looked at the B-unit carbody but it was too far gone to be put back in service. When the Sharks worked, they pulled well, the air throttle gave the engineer an early version of creep control, the wheels would slowly slip/creep which maximizes adhesion. John gave us a stack of plastic builder's plates since Castolite made casting kits. We went through a fair number of them as "fans" were prone to steal them. Some cracked and we gave those to whatever fan happened to be standing nearby. The units rode well and it seemed you sat a little higher than in the Alcos. You had to watch the speed, they would get going faster than you realized because of the smooth ride.

I do know that they are still around and know a couple people who have been in them with in the last two years.
I have the Connections

Glad to hear that! Hope to see them back out before they end up at the end of a welder's torch.
Top

D&H 1205 was tested last night on the SH&W. I have to say for an out of the box model, how quiet it was! I have bought many new RTR models and they normally have some noise to them, this ran exteremely quiet. The headlight is not too bright but the painted blocker to make it look like a dual headlight looks nice.

Pulled 15 cars up the 2% grade out of Sand Hill Westbound without a struggle, but any more and she would stall. The overall detailing and the radiator grills are good as well as the factory horns are mounted well. When I add the 1216 they both should work nice together in push-pull config. Impressed and good for the $$.
Top

Steven, you also know of two people on this board that know what building they are in......
Making the railroad all Catywompus since 2008