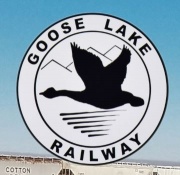 Goose Lake Railway has, since September of 2017, been managed and operated by parent company Nexxt Rail, LLC. GOOS is operated and managed through a contractual agreement with railroad-owner Lake County, OR. GOOS is a shortline railroad that runs 55 miles from Lakeview, Oregon to Alturas, California and then an additional 50 miles on to Perez, California, where it meets the Union Pacific mainline to Klamath Falls, Oregon. Up to two trains run weekly, dependably and safely carrying customer products to market.

Goose Lake Railway interchanges with UP at Perez, California.