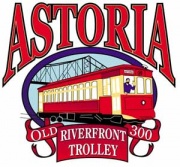 The Astoria Riverfront Trolley is a 3-mile heritage streetcar line that operates in Astoria, Oregon, United States, using former freight railroad tracks along or near the south bank of the Columbia River. The line has no overhead line, and uses a generator towed behind the trolley. The service began operating in 1999, using a 1913-built streetcar from San Antonio, Texas. As of 2012, the service was reported as carrying 35,000 to 40,000 passengers per year and has been called a "symbol" and "icon" of Astoria. The line operates seasonally, during spring break, and from May through September.

Volunteers from the non-profit Astoria Riverfront Trolley Association (ARTA) operate the service and maintain the streetcar and tracks. The city of Astoria has provided some funds for certain purchases, including a new carbarn in 2001 and a contribution to the cost of purchasing the streetcar. The car was on loan from San Antonio for the first seven years, but was purchased by ARTA in August 2005. By 2004, the Trolley had become "one of Astoria's most popular features" and "a main attraction in the city of Astoria".