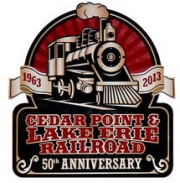 In 2013, Cedar Point & Lake Erie Railroad celebrated its 50th Anniversary. In its first 50 years of operation the ride had more than 116 million passengers.

There are currently four engines in operable condition on the railroad, #44 Judy K., #22 Myron H., #4 George R., and #1 G.A. Boeckling. Myron H. or Judy K. are the primary locomotives used on a daily basis. Either locomotive can be used as the second engine for two train operations. The G.A. Boeckling and the George R. are available as back ups if their services are needed.

The red and green trains both contain 6 open air cars in each set. They were built by on old Denver and Rio Grande Western flatcars and, trucks, which were patterned after Walt Disney's Narragansett-style excursion train car set. CPLE also has a former C&O caboose (formerly used on the CPLE) that is displayed in Frontier Town.