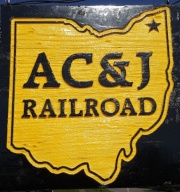 The Ashtabula, Carson & Jefferson Railroad is a 6 mile shortline in Ohio. Chartered in 1984 by local business interests to preserve the "Jefferson Industrial Track", the AC&JR today provides bulk commodity shipping and transloading services in Jefferson, Ohio -- home of the road's office, historic depot, and at one time a tourist railroad operation. The 6 mile trackage is a surviving segment of a former Lake Shore & Michigan Southern Railway division connecting Jefferson to points north and south. Later, the line would come under the control of the New York Central, but by the late 1950s trackage south of Jefferson had been removed. Under Conrail, the line was slated for abandonment in the early 1980s, until local interests and the State of Ohio secured the property for shortline use. Tourist operations under the name Ashtabula, Carson & Jefferson Scenic Line began in 1991, but ended in 2014.

Currently many of the railroad's customers are not located along the railroad but are served from its two transload facilities.

The AC&JR interchanges with the Norfolk Southern at its small Carson staging yard, just south of Interstate 90 in Carson (Ashtabula).