The Huntsville Branch Railroad (HSVR) is a former NC&StL line running 64 miles from an interchange with CSX at Decherd, TN to the Tennessee River at Hobbs Island, Alabama. The Seaboard System applied to abandon the stretch between Elora, TN and Huntsville, AL in 1984 due to a lack of online traffic, and to sell the portion from the NS interchange in Huntsville and Hobbs Island to another entity. A group of local investors decided not only to purchase the Huntsville to Hobbs Island section, but also the Huntsville to Elora section, believing access to two railroads would be attractive to businesses looking to locate along the line in Huntsville.

In 1986, the Seaboard System made further cuts, attempting to abandon not only the line between Decherd and Elora, but also the 17 mile branchline from Elora to Fayetteville, TN. As there were a number of customers between Decherd and Fayetteville, the HSVR purchased this section of the railroad also, re-uniting the Huntsville Branch under a single owner. Initially the power on the Huntsville branch railroad consisted of 4 ex-L&N GP9s acquired from SBD. In 1986 HSVR purchased two ex-Erie Western, nee-CNW RS3s to assist with the additional traffic due to the expansion.

In 1996, due to very low traffic on the Fayetteville branch (other than the grain elevator at the junction with the HSVR main at Elora, the only customers were a co-op and a fuel dealer at Fayetteville that got service a few times a year), HSVR applied to abandon this line. At the request of the co-op and the fuel dealer, as well as with the support of the public to maintain the railroad due to the potential for more industry to develop along the line, Lincoln County, TN purchased the Fayetteville branch to operate as the Lincoln County Railroad (LNCR), along with the two RS-3s owned by HSVR. By this time, the GP7/9s on the HSVR had been retired and replaced with 2 ex-NS GP35s and 3 ex-BCOL C425s purchased in 1992.

Due to growing traffic on the Huntsville Branch, HSVR made the decision to purchase some 6 axle power throughout the 2000s; first, a former DRGW SD40T-2 was purchased in 2004. Following this, two ex-NS C39-8s were purchased in 2009. At this point, the GP35s were retired leaving the C425s to service the industries south of Huntsville, which could not handle 6 axle power due to tight curvature. In 2016, HSVR purchased two ex-LMX B39-8s from Iowa Pacific and two of the C425s were retired, leaving one to assist the B39-8s on days with heavy traffic. The two retired C425s were donated to the North Alabama Railroad Museum.

Traffic on the Lincoln County Railroad, however, is not as significant. While the grain elevator at Elora is busy, particularly in the fall during the grain harvest season in north Alabama and Southern Tennessee, the line to Fayetteville is only run a couple times a month, with fertilizer being delivered to the Lincoln County Co-op throughout the spring and summer, and fuel being delivered to Parson's Oil throughout the winter. Motive power on the LNCR is still the original RS-3s, now painted in a simple yellow paint scheme and lettered "Lincoln County Railroad". 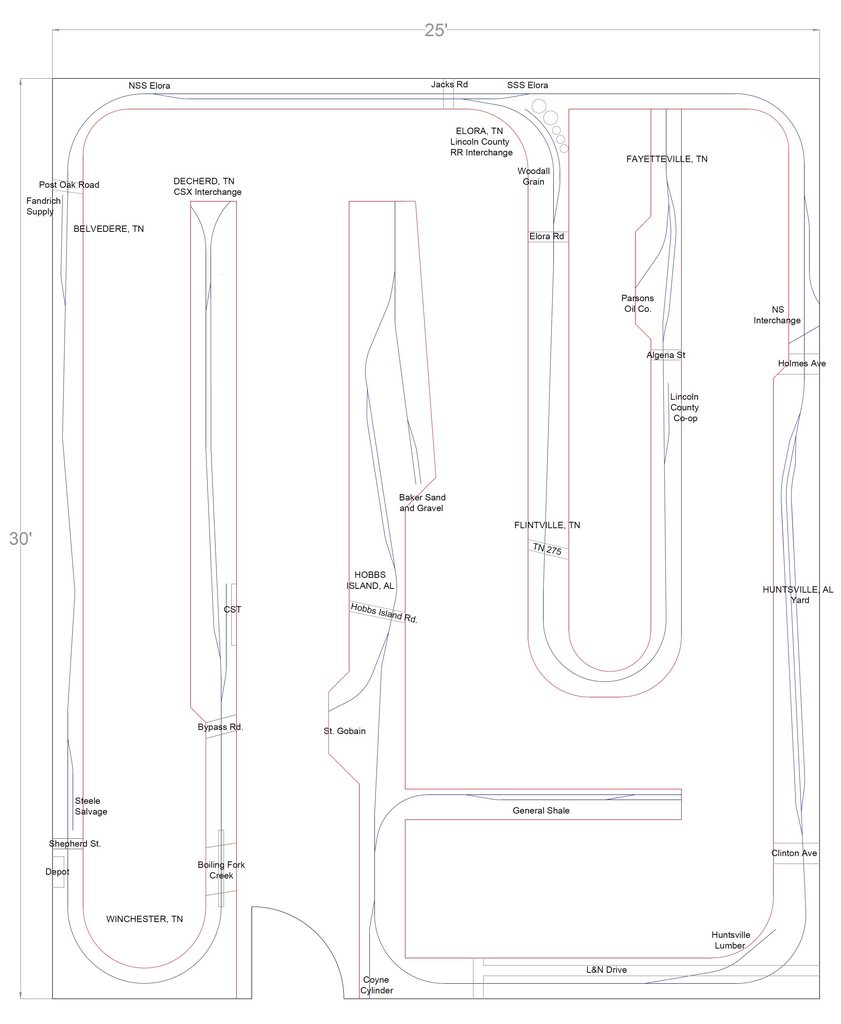 And finally, some side notes about what happened to the Huntsville Branch in real life. SBD succeeded with abandoning the line between Elora and Huntsville in 1984. The line from Decherd to Fayetteville was abandoned in 1986. A 5 mile portion on the north side of Huntsville was saved and became the North Alabama Railroad museum, and the line from Huntsville to Hobbs Island became the Alabama Industrial Railroad, later the Huntsville Madison County Railroad, which operates ex-LMX B39-8s 8539 and 8560 today, among other power.
Baxter Barnes. 21. Alabama.
Meow. Now you know how to speak cat. -Flickr

Well thought out lego. I enjoyed reading about it

.
PatC created a monster, 'cause nobody wants to see Don Simon no more they want AARR I'm chopped liver, well if you want AARR this is what I'll give ya, bad humor mixed with irrelevant info that'll make you roll your eyes quicker than a ~Z~ banhammer...
Top
Post Reply
2 posts • Page 1 of 1