This is a paper railroad I've been creating for a while now and decided to share. For me it's all about the realism of the story so I created an entire history from beginning to the current date.The story starts with the the Little Kanawha Railroad Company being organized in 1896 to build a railway east from Parkersburg, WV to Burnsville, WV. In 1903 the Elk and Little Kanawha Railroad was built as a logging railroad. But it effectively connected the LKRR with B&O's Grafton-Charleston line. Also in 1903 the Chesapeake Western Railway attempted to take over the Little Kanawha Railroad but was turned down. So far this all happened, but here is where reality ends. In my world the Chesapeake Western took over the Little Kanawha Railroad and in 1908 successfully conected the two railroads with trackage rights on the B&O and WM from Gilmer to Elkins, WV and a new line from Elkins to the Chesapeake Western in Stokesville, VA. Managment soon realized that even with the coal from there wasnt enough traffic along the railroad to be profitable, so in 1914 they built a main line from Parkersburg north to Zanesville, OH and then continued further north the port of Lorain, OH. In 1920 the 3ft gauge Elk & Litlle Kanawha was puschase by Chesapeake Western and standard gauged.
Fast forward 39 years to 1959 and the Chesapeake Western is a highly profitable railroad and after several months of negotiations managment agreed to merge with the Virginian Railway. Both companies were combined into a new railroad called Virginian & Western Railway. Two railroads were conected by using New York Central's need for cash and purchasing 51% of their Columbus-Charleston route in 1961. Two years later the Interstate Commerce Comission ordered the B&O Railroad to sell it's majority share of WM Railway. The Virginian & Western was the highest bidder and took control of the WM in 1963. Soon afterwards the Virginian & Western leased the Pittsburg & West Virginia Railway in 1964 with the option to purchase. Three years later that option was chosen and the P&WV was purchased in 1967.
When the Erie Lackawanna opted out of Conrail they started looking for a merger partner. After Chessie System fell through the Virginian & Western was the next in line. This time the merger was succesful and both railroads were placed under Erie Western System along with the WM and P&WV in 1975, but all four continued to operate seperatly much like Chessie System.
This continued until 1983 when the Erie Western System merged with the Appalachian Central Railroad. Which is another one of my paper railroads that operates between Nashville, TN and Ironton, OH via Corbin, KY. All of the railroads under Erie Western System and the Appalachian Central were merged into Appalachian Western Railway by 1984.
1985 brought low profit margins for Chessie System and to make some quick cash they granted trackage rights between Parkersburg and Ironton, OH and sold the Parkersburg-St. Louis route to the Appalachain Western. In 1989 the Appalachian Western purchased the P&LE's share of the Monongahela Railroad. Shortly after in 1991 the P&LE was purchased by the Appalachian Western. In 2004 BC Rail was put up for sale by the Providence of British Columbia and after a bidding war with Candian National the Appalachian Western ended up leasing BC Rail. In 2009 the Elk River Railroad was purchased and after years of trying the Appalachain Western had finally gained ownership of part of the ex B&O Charleston-Grafton route. Two years later in 2011 the Appalachian Western was asked to operate Big Eagle Rail, West Virginia's oldest short line, in Winifrede, WV. Below is the system map. 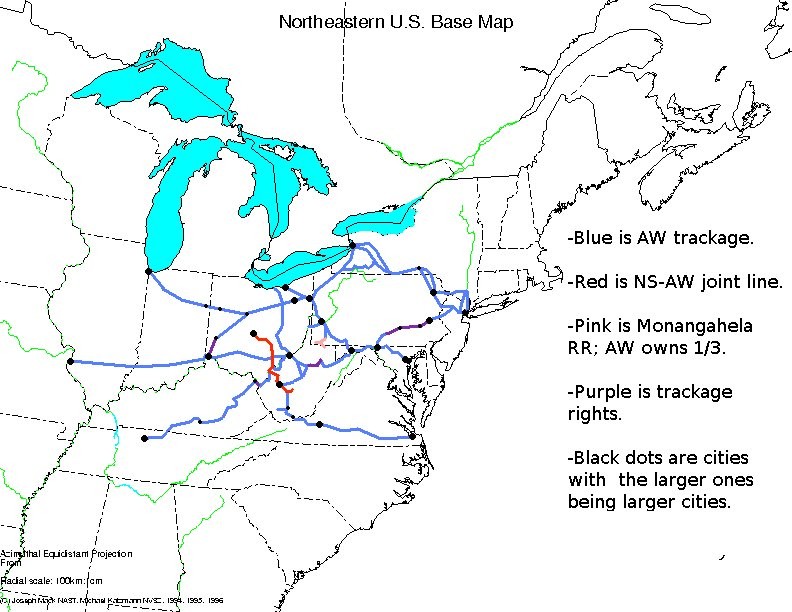 The locomotive roster is further down on this page.
Last edited by TCtrainguy17 on Wed Jul 24, 2013 3:40 am, edited 4 times in total.
My flickr account http://www.flickr.com/photos/corey-stanke/
Top

Is this part of the organized paper railroads? Just wondering. It sounds like you have a great railroad here! And the detailed history is just interesting.
Thunderstick69
http://www.flickr.com/photos/65079206@N03/
http://www.railpictures.net/showphotos.php?userid=61507
#bringhashtagstorrfight
Top

Cool railroad. I like how you added so much backround history to it.
New Youtube page: https://www.youtube.com/channel/UCc5AC6 ... E7wQUw-reQ
Top

If nobody minds I think it will be.

I'm fine with you joining.

Unless 3 others in the group say no, you're in

I vote hes in

Me too. No problems here

You are officially in

when are you going to post a map?
Thornapple River Rail Series - YouTube
Safety today is your investment for tomorrow
Top

im late but sure!

does anyone connect whit this RR?
"Ann Arbor 2373 Calling... Milkshake. Over"

does anyone connect whit this RR?

Thanks everyone for letting me in.
AW current locomotive roster.

Sorry i forgot to add that the electrics since the electrified section of the Virginian still exists.

DT&I wrote:I think I see a partnership with the TSCR... lol if you want it.

I believe that would benefit both sides

In Pennsylvania I have all of the Pittsburg and Lake Erie which is Youngstown to Connellsville via Pittsburg. The Pitsburg and West Virginia which is Connelsvile to Pittsburg Junction, OH (this is currently the east end of the W&LE). And the Erie Lackawanna which is in the northwestern corner of PA.
In Ohio the EL and that runs east to west: Youngstown-Akron-Mansfield-Marion-Lima and on to Idiana. Also I own the ex B&O across southern ohio from PArkersburg, wv-Athens oh-chillicothe-Greenfield(just south of Washington Ct House)-Cincinnati and on to St. Louis. I also created a line north from Parkersburg-marietta, oh-Zanesville-coshocton Wooster-Lodi-Lorain where i have a pier for loading boats on the great lakes with coal. I think thats it.
My flickr account http://www.flickr.com/photos/corey-stanke/
Top

Okay so we can interchange in all of those cities. Do you serve Detroit? If you so would you be interested in runnning an intermodal hotshot between detroit and New York with the TSCR running it to Cleveland and the AW takeing it to New York?
My flickr account http://www.flickr.com/photos/corey-stanke/
Top

TCtrainguy17 wrote:Okay so we can interchange in all of those cities. Do you serve Detroit? If you so would you be interested in runnning an intermodal hotshot between detroit and New York with the TSCR running it to Cleveland and the AW takeing it to New York?

We'd love to! Once our contract with CSX expired this July 4th all trains running on the CSX to New York will be shipped on your line.
Thunderstick69
http://www.flickr.com/photos/65079206@N03/
http://www.railpictures.net/showphotos.php?userid=61507
#bringhashtagstorrfight
Top

Awesome! It may not be water level like CSX's but is shorter and I'm pretty sure that AC traction power is meant to tackle tough grades.
My flickr account http://www.flickr.com/photos/corey-stanke/
Top
Post Reply
148 posts