On Thursday Morning July 21, 2005, I went out to Durand, with my Mother, and My dog Cali for a day of Railfanning. This turned out to be a very interesting day, and it got VERY VERY interesting later that afternoon. I'm trying out the thumbnail concept that Scooterb uses for his reports, because I took so many pictures.
We arrived at 7:50 AM that morning. We didn't have to wait long for a train.
At exactly 8:00 AM, Amtrak's Blue Water, Train #365, arrived at the station. 365 was one of two trains that whistled for the crossings that day.
Photo 1:

Passengers waiting at the depot watch as their train arrives:

Passengers board the train for their trip west:

With all on board, the train departs Durand for its next stop at East Lansing. #30 gives her all as she pushes the train away from the depot:

Rounding the Curve west of the station, with 90218 whistling for the Oak Street grade crossing

Less than two minutes after Amtrak left, CN Train 398 shows up.
Rounding the curve west of the station:

Banging over the diamonds:

Just Five Minutes after 398 passed, IC 6113 shows up with a rather short southbound.
Entering the Chicago Wye:

The train enters the Holly Sub:

Things were pretty quiet for about 30 minutes after that, but around 9:00 AM, I heard some rumbling coming from the north. It was the southbound TSBY freight. They did some switching in the yard, and then left for Osmer. 393 and 2681 were the leaders on the train this day.
As the train leaves the yard, the two geeps kick up some smoke. I suppose it's the Alco trucks.

393 leads the train over the diamonds. I personally like this photo, and I guess the guys at Railroad Picture Archives liked it too, because they made it an Editor's Pick!!

The southbound train had a bunch of these neat GREEN hopper cars. Brand new I might add.

Things were pretty quiet for about 20 minutes after the TSBY came through, but then this westbound blew through. I was walking the dog around the station, and I nearly missed this one, but my mom alerted me to it just in time.

After that, things got really boring, really fast. After waiting nearly an hour, at 11:00 AM we decided to head out east of town to look at the Cantilever signal at the Byron Road grade crossing. We got there just in time to catch CP Rail X534 go tearing through the crossing.
I should have waited a few more seconds until the train was closer, but this came out Okay:

The train races toward the cantilever:

After this, we went to have lunch back in town.

We went back to the station after lunch. After waiting another hour, I saw a headlight on the Holly. As the train got closer, I noticed that the lead locomotive was black. At first I thought it was the TSBY, but it turned out to be Illinois Central SD40-2 #6000, with an exteremely long train behind it:

Another view as the train enters the Chicago Wye. Hey, what's that second unit?

Southern Pacific AC4400CW #187 was the second unit in this consist! What a rare catch!

About 10 minutes later, Train 395 comes booming into town with SD60F #5505 and Wisconsin Central SD45 #7523. They whistled for the Main Street crossing, but I'm not sure about Oak Street.

395 had a bunch of flat cars in the consist today, and I saw a possibility with them. Thanks to Greg Fullmer for the Inspiration:

395 came through around 1:30 PM. We were plannng to head for home around 2 PM, but at 1:58, I heard TSBY Notifying HESR that they had just passed Pitt.
2681 brings the train north past the depot:

Then things got really interesting, and surprising. After photographing 393 and 2681, and watching the first several cars pass, I turned my back on the train to review the pictures. When I looked up, I saw my mother, and several people from the station staring at the train with their jaws on the ground, and eyes wide open. I turn around, and what do I see??
THIS!!

And that concludes my day in Durand. Keep watching the trip reports section for pictures of 2-8-0 #76 being unloaded at Owosso!
Top

Great series Gregg, what a catch getting that old steamer. Also congrats on your editors pic.
Scooterb
Top 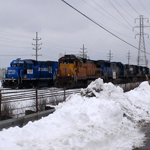 When I snapped that shot of those new Trailer Train lumber cars I didn't think it would turn out that clear. I know with my old film camera it would of just been a blur.
Top