13:05
CN 276 by Brant Jct running light engines.
Saw him as I was driving home from doing yearly inventory at work.

Got a call from the guys at the hobby shop that there was lots going on and I needed to get up there ASAP.
The hobby shop in Brantford is located in part of the VIA station. Talk about great location. The owner is originally from Michigan. He's a big DT&I fan and hosts their website. His Grandma, I think it is, used to live right by a main road crossing in Maybee. He used to watch the DT&I go by from the front porch as a kid. But I digress.

Upon arrival I learned that CN 385 had stalled on the hill between Bayview Jct. and Copetown West. Bayview is mile 0.0 of the Dundas Sub. and Copetown West is the location of the 1st crossovers West of Bayview at mile 10.9. Back in steam days CN used to have a helper pocket at Bayview to help trains up the hill to Copetown.

During the course of this report 385 was in the process of pulling the 1st 1/2 of his train up to Masseys at Mile 21 and then as windows of opportunity presented themselves he headed back down to Copetown West to get the 2nd 1/2 of his train which he eventually tacked onto the head end of what once was the 1st 1/2. 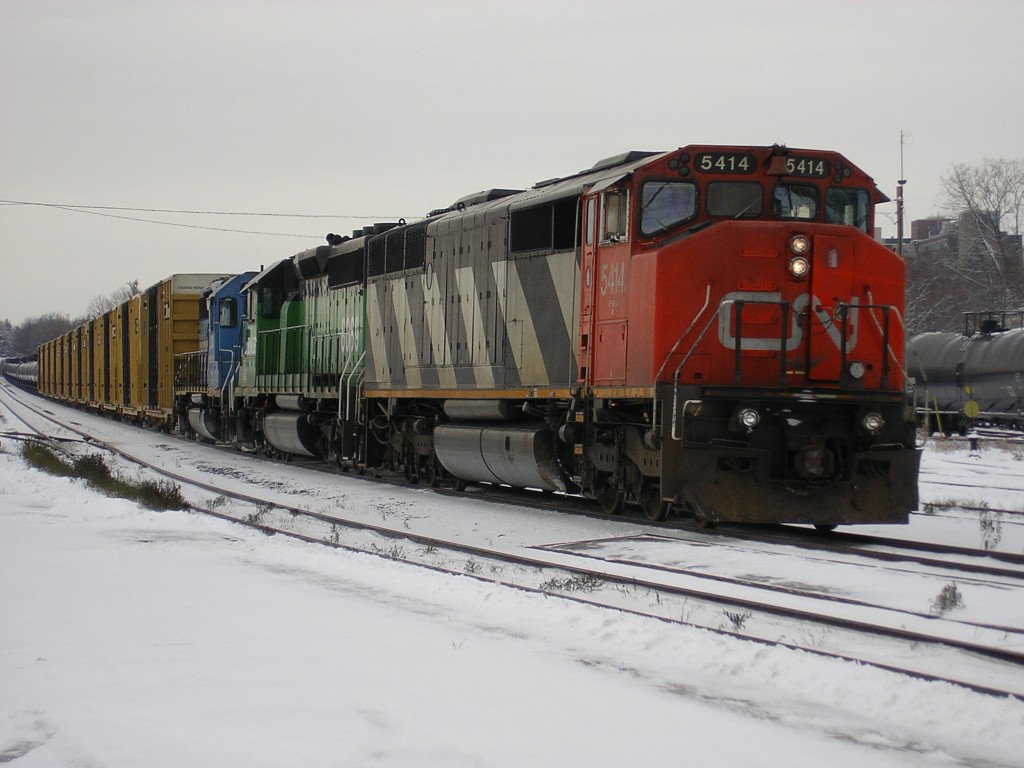 He then left and pulled up to Masseys, the crossovers East of Brantford at Mile 21.0 where he waited until approx 18:15 to depart East after 385 had pulled the 2nd cut clear of the crossovers at Masseys.

16:55
CN #393 Westbound by Oak Park Road. This crossing is by the location of the detector West of Brantford at Mile 27
Was pushing the light for a train at speed at this time of day.

His Conductor was en-route by cab to meet the head end at the crossing just east of Oak Park Road.
I heard the Engineer talking to him in the cab saying to go there rather than the Brantford station as he was afraid they'd stall on the hill trying to get out of Brantford.
The cab had picked the Conductor up at Masseys after joining the 2 halves together.
He was working really hard pulling up the grade through Brantford.
The hill starts around the east end of the Brantford yard and ends just past the crossovers at Hardy.
I listened as he went by and could not hear his middle unit working.
I suspect this unit was the reason he stalled on the hill. That and a big heavy train.

Then the Westbounds who had been stuck in behind 385 got their turn. 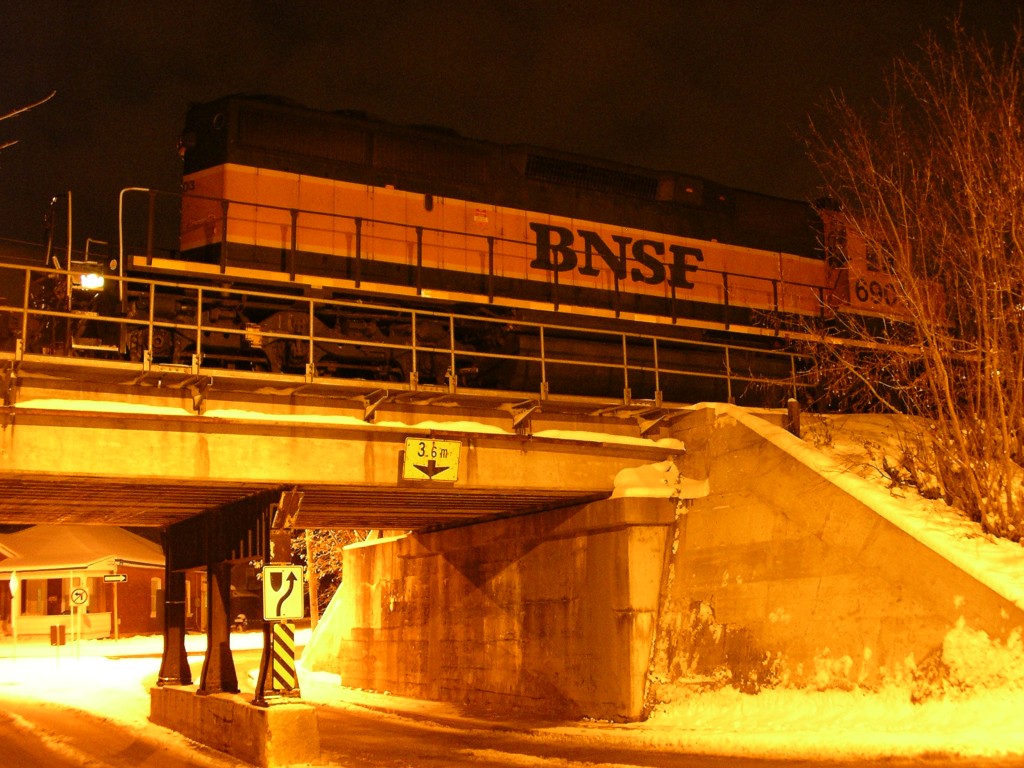 Sitting at the west end of the yard waiting for the conductor to walk up after making the lift. 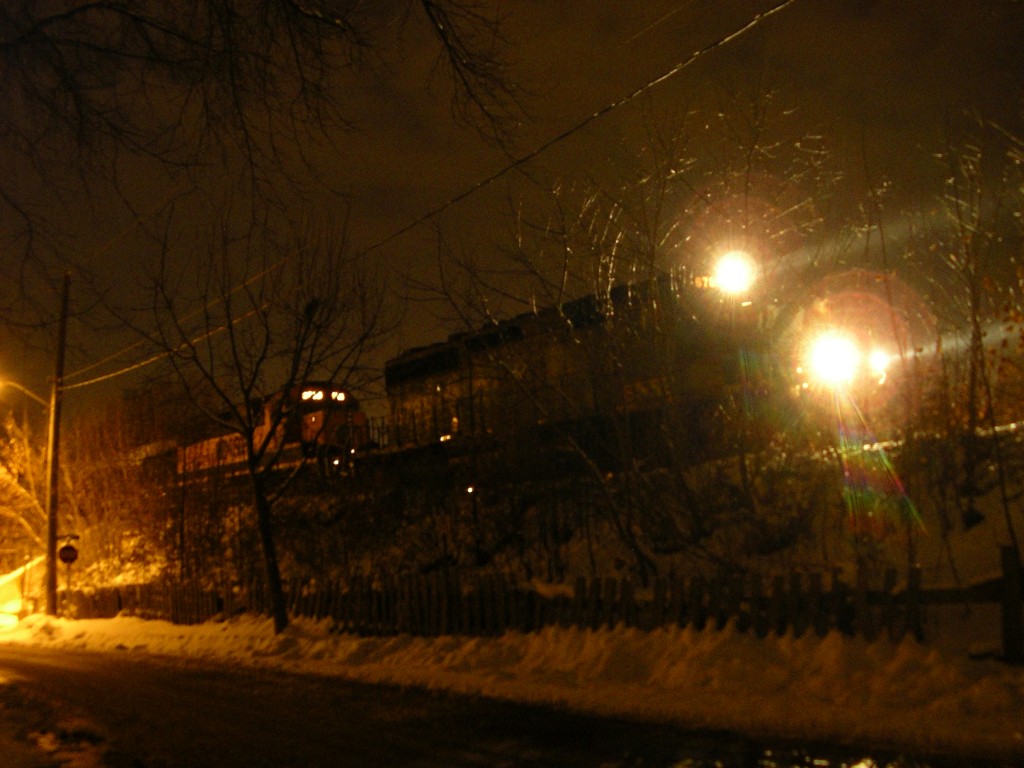 Sorry for the long report but it was a busy afternoon and evening.
Should really screw up normal times you'll see the westbounds on your side of the border.
Top

Thanks.
I know it's not Michigan stuff, but alot of what goes through here either comes from or is going to your end of the world.
It's a great spot to catch action due to the station being right at the east end of the yard.
There is a yard job/local that works 7 days a week, 580 Monday to Friday on day shift and 587 Saturday to Wednesday.
Lots of foreign power as well as the 2 NS trains. Add to that 8 VIA's a day on weekends and 10 Monday to Friday with 1 extra VIA thrown in Eastbound on Friday night.
Also we have RaiLink now a Rail America operation that comes into here with 1 train from Hamilton that turns at Brantford to go down the Hagersville Sub to Nanticoke on the shore of Lake Erie and another train which runs from Nanticoke to Brantford and return with their variety of power and it keeps me busy and happy with lots to see and shoot.
Top

Maybe a future fanning trip that way is in the future? I know Luke mentioned it also.
Top

It's a Railfan friendly station at Brantford. Lots of people hang out to watch trains.
Also as I mentioned in a reply to Luke, Bayview Jct. is only 20 min down the highway farther east and their is a pedestrian walk bridge over the tracks.
If you do plan to come send me a message and I'll be glad to show you around if available.
Top

Aleks wrote:It's a Railfan friendly station at Brantford. Lots of people hang out to watch trains.
Also as I mentioned in a reply to Luke, Bayview Jct. is only 20 min down the highway farther east and their is a pedestrian walk bridge over the tracks.
If you do plan to come send me a message and I'll be glad to show you around if available.

isn't bayview jct where the bridge runs over both CN and CP trackage? Or was that the area near London where they both cross over each other.
Webmaster
Railroad photos on Railroadfan.com
Top

That's west of London at the East end of CP's Lobo Siding.
Bayview is where the CN Dundas Sub Meets the Oakville Sub.
Dundas Sub starts at Bayview and runs west as far as London.
This line handles all the trains heading to Sarnia and Windsor.
The Oakville Sub turns into the Grimsby Sub at the Hamilton yard.
The Grimbsby Sub sees the traffic heading to Buffalo and Niagara Falls.
The Oakville Sub gets all of this traffic. At Burlington to the East the Halton Sub splits off the Oakville and most of the CN freights head north on this line to CN's big yard in the north end of Toronto.
The Oakville Sub continues east to Toronto's Union Station.
Bayview is actually the eastern end of the wye.
The other 2 Junctions are Hamilton Jct. Which is the south-western leg. This is where the CP trains can get on and off the CN as they come to and from the former TH&B tracks. This is the way the GO Trains run as well. The west leg of the wye runs from Hamilton West to Hamilton Jct. This allows traffic to go from the Grimsby Sub to the Dundas Sub. This line is referred to as the "Cow Path" both by the Railfans and CN.
NS 327/328 go this way as does CN 330/331 and the Rail America "Steel Train" 598/599.
Running parallel to the "Cow Path" is CP's line from Hamilton to Guelph Jct. It climbs allthe way from Hamilton Jct. and crosses over the Dundas Sub just west of Hamilton West. Its a good climb for CP all the way up the escarpment to Guelph Jct. Good grade with lots of curves.
Top

Thanks for the info on the #411. I saw it sitting on the west side of Flint this afternoon, but only had the number on the 6903. I stopped in Durand to catch it going by, but a surprise EB on the track closest to the station blocked my view of it in Durand. I enjoyed your report and really appreciate being able to get the number off of that lead unit.
Top

Glad to be of help.
Hope we can get more of this kind of dialog going on both sides of the border on the CN/GT.
It's good to know what's coming my way as the wife doesn't like me being up all day. Mornings she's OK with cause she sleeps in anyway.
But if I know something good is coming I can slip up in the afternoon or evening to catch it.
Likewise I'm hoping that the westbounds I report help the guys over Michigan way to know what's coming.

PS I didn't know 411 ran that far west.
He used to be a Toronto to Sarnia train.
The 400 series trains did not used to cross the border, only the 100, 200 and 300's.
This power may be going through on another symbol on the Michigan side unless you heard him identified on the scanner that way.
Let me know.
Top

"I saw that same power set come west through Trowbridge today. I got pics, but the camera I am using right now is the digital equivalent to Kodachrome 64: Only good for sunny days. Pictures came out too blurry.

I figured Gregg would have some good watching today, as I'd caught those two in Durand, then the tail end of another CN EB at the I-69 overpass on the west side of Lansing. I'd considered getting off in Charlotte to try to see what I now know was 411, but decided to keep going. Starting to wish now that I'd gotten off the freeway to attempt to catch the train...
Top
Post Reply
11 posts • Page 1 of 1