Since today was such a nice day down here, and a Friday, having nothing better to do, I decided to go out and find some trains. Last Friday night I'd managed to get over to Chesterton for about half an hour (combined that trip with another, but I don't think I managed to get any decent shots since my camera and I don't work together all that well at night yet. Having already seen some NS action recently, I decided to chase the CN north from the state line as far as I could get before the daylight ran out. Since I had a 2:00 class, I couldn't leave until after 3, getting out of town about 20 after. Following the CN tracks north, first to Granger, then to Edwardsburg netted a grand total of a yellow signal facing the south at Edwardsburg. Continuing north, hitting as many of the rural grade crossings as I could, and listening to the scanner for help, I finally ran across a SouthBound at Hospital Road. Since I'd crossed the crossing once already and had gone on up the road trying to find a spot to turn around, he was already across the crossing by the time I realized he was there. However, there is another road just west of the crossing that goes south, so I figured, why not?

I managed to chase the train about a quarter mile before the road veered away, but I did get a quick shot of the sun glinting off the two locos pulling the train. That's probably the best shot of that train that I was able to get. I never did get loco numbers from this train, although it was loaded autoracks, with a UP loco on the point and a CNW painted loco trailing, elephant style, I believe.

So the road I had taken eventually ran me into another road, Hess Rd, I think. I took that down to Jefferson Center Road, an east/west road, and upon crossing the tracks, I could see the train stopped about a half mile or more north of me, with the headlights turned off. It also looked like the crew was on the ground, and the signals just on the other side of the road were showing red over red, so I figured they were setting up for a meet.

I then drove a few miles (like 2) back toward Edwardsburg, figuring I'd get the NB train, then wait for the SB, but two miles south all I could see were red signals. That's probably not a good thing, I thought. So I headed back toward the train, finally realizing that something had put them into emergency, and that they weren't just stopped waiting for a meet.

I think they were concerned that they had blocked Hospital Street with their train, but they had also blocked Evans street as well.

Right after I got the above shot, I turned the car around, and headed back to the main road. However, there was also some chatter about someone having come to help them out or giving them a ride or something. Somehow I managed to get to the other side of Evans crossing before the 'help' was all the way through the crossing. I wound up catching this 'help' at the Jefferson Center Crossing a few minutes later.

UP 9667, SP 2688, with UP patch on the nose, and under the cab windows, CN 6401, and GT 4615, all elephant style- which is a good thing I got to the crossing in time to get my shots through the winshield, no time to get out and use a tripod- pulling some intermodal well cars- with and without containers, and at least some auto racks. 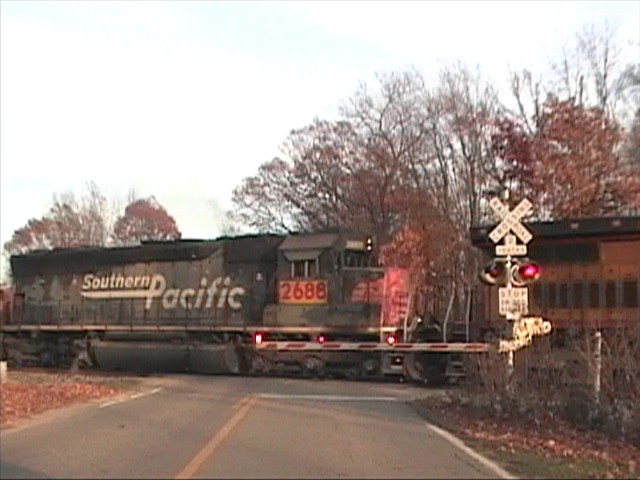 Not figuring the other train would be moving for a while, I decided to chase the moving train back toward Indiana. Daylight was running out too, and I kind of wanted to eat in the school cafeteria anyway, so I hightailed it back toward Edwardsburg. The only other time I saw that train was upon the May (?) Road crossing on the south side of Edwardsburg, and that was just the last boxcar off in the distance. Didn't see them again at all, not even after getting back into Mishawaka. I didn, however, see the train that had been stopped, at Jefferson Avenue in Mishawaka, although I'd seen it coming and was kind of idling around the crossing, the train snuck up on me and by the time the camera was up and focused the locomotives were already through the crossing.

I'd hoped to see more trains, but since darkness was falling, I headed back to school to get the video and pics in a slightly more usable environment than stored on the camera. I'm considering trying to get down toward the Goshen area tomorrow morning to see if I can find anything interesting on the NS. If I do, I'll try to post it here at some point.

Frustrating isn't it that CN doesn't call out the signals along the line. Thanks for getting this posted...I'll have to check out a map as to where all these roads are that you headed along. Very good detailed report though. Glad you at least saw some in the daylight there..I haven't 'faned it anywhere between Schoolcraft and South Bend before.
Webmaster
Railroad photos on Railroadfan.com
Top

Check out my trip report, I seen 3 of the four locos headed south into Flat Rock yard, on thursday morning, so they had to origonate out of there.
http://www.railpictures.net/showphotos.php?userid=9609 My photos at RailPictures.Net!
Top

I thought I'd seen something somewhere about an SP unit being somewhere in the state, but don't recall when or where...and when I read your report the first time, somehow I managed to skip right over those three loco numbers...guess I'd forgotten the numbers already. Actually, with what I got to see today, I probably did forget 'em, speaking of which, once I get my video into the computer and all the rest of the pics taken off of that, I'll have a report from my trip to Goshen/Elkhart/Edwardsburg today (Edwardsburg? didn't I do that yesterday? yeah, but since I was like 5 miles from Granger on the way back to school, I decided what the heck, saw an eastbound coming, and ran for a good photo spot a couple miles north of Granger- the parking lot of the Taco Bell in Edwardsburg). Might be tomorrow though before I get the chance to get it up, although I did get a bunch of pics of the Elkhart and Western, which I uploaded earlier.
Top
Post Reply
4 posts • Page 1 of 1