by ConrailDetr​oit
After dumping a loaded coal train, why would the first two hoppers still remain loaded with coal? 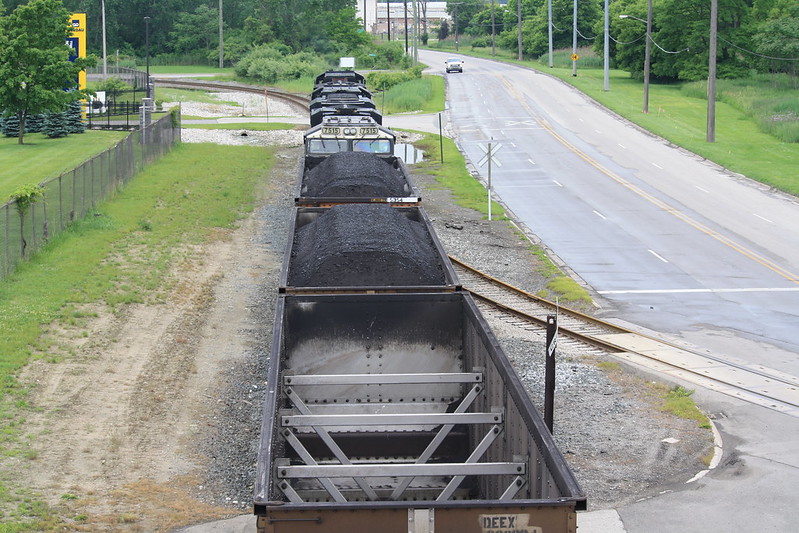 by Mike H
Monroe cannot dump cars unless they are "right stripped" mean all the cars are facing the same way so that they can be rotary dumped. In this situation it appears that the first two cars are facing the opposite way of the rest of the cars, likely because they were added to the train probably in Alliance, NE to make the train full after some other cars that were bad ordered or pulled from the train for some other reason somewhere along the route.

Since the rotary end is not against the locomotive they probably were not willing to take the time to uncouple, dump, recouple, wait for the air to charge & start moving again just to dump 1 car. The 2nd car is rotary coupler to rotary coupler with the 1st car which is usually a no no for dumping, so unfortunately both cars end up getting skipped in favor of not stopping the train.

Back before CN won the coal contract I used to see NS pull empty trains out with loads in the middle of them all the time. One big complaint by DTE was that those cars would keep going back and forth as loads until either NS or BNSF was willing to kick them out, which all Class 1's hate doing. CN was willing to kick cars out & right stripe the train before delivering it to Monroe which probably helped them win the business. Supposedly NS was going to do this as part of their deal when they won the coal back, but it doesn't appear that is happening. I hope that helps.

by DaveO
I look at the picture and see that the painted ends(rotary coupler end) are all facing away from the engines.
That would make it impossible to dump with the road power attached but...

I believe the Monroe plant can dump two cars at a time and that the road power is uncoupled from the train.
A car indexer is then used to move the coal cars through the rotary dumpers. Then the road power is reattached.

If for some reason there is no car indexer, then not having a rotary coupler next to the engines is a problem. Beyond that, I don't think they would dump loads attached directly to the engines.
All times are UTC-04:00
Page 1 of 1