The end is nigh for Delray Tower. It's not the very last of Michigan's manned interlocking towers, but it's certainly one of the most beloved among railfans, even though it's a lesser friendly neighborhood. You can sit in one spot and see action from each of Detroit's class 1 lines, with moves lined by a real person keeping an eye on the things from a second story window. Starting in 2000, I gained a good friend in a long-time Delray operator, the John Deangelis of "Parking reserved for" fame. He retired in 2008 after a career that first began on the C&O, but I occasionally still made it to the junction to see a train or two.

I just wanted to share some of my favorite photos from through the years of the tower and vicinity. Feel free to reply back with your own. I'll be interested to visit the junction site soon with the new track arrangement and signals on site, but it won't be quite the same.

GP30 Road Slug #2328 rolls east past the tower with a transfer job from Rougemere Yard. Despite owning and operating the tower, CSX was not the busiest railroad through the interlocking, although more yellow and blue passed the tower after the Conrail split.

The Delray neighborhood is industrial, no doubt about that. Not much can truly clean up the landscape, but a fresh snowfall can do the trick. A tunnel-bound CP train is shown coming off the NS in February, 2008.
Top

The Carbon Street road side of the tower, sporting CSX signage. The story I heard was that when the "Delray - Detroit" wooden sign was added to the bay window end facing the diamond in 1996 or 97, that Conrail Blue didn't sit well with CSX managers. Within months, new CSX Transportation signs were installed on every side of the tower, so there was no mistaking who ran the pile of bricks at Dearborn Avenue.

A CSX train gets underway from Rougemere Yard heading to a Conrail yard for interchange.

The current Delray Tower was built in 1944 to replace the previous wooden tower, which stood right next to it at Dearborn Avenue. At that time, the original routes of the Wabash and the Michigan Central were still in place as industrial spurs crossing Dearborn Ave, even though both had been rerouted to the current alignments ca. 1920 when new bridges were installed over the straightened Rouge River. The Model Board, in addition to its own significance, relayed this history long after these routes were abandoned and numerous track and signal changes made several of the Armstong levers unneeded.
Top

WELL as sad as it is. The tower is slated to come down on Monday the 16 th. No 11th hour reprieve.
Top

WELL as sad as it is. The tower is slated to come down on Monday the 16 th. No 11th hour reprieve.

Tear it down or close? I don't think it is necessary to tear it down as the building makes a decent storage spot for MOW and signals guys. Just look at deshler which has been standing for years since closing.. seems like this would be an odd move to tear it down. (if thats what you are implying)
"Ann Arbor 2373 Calling... Milkshake. Over"

Unfortunately once the neighbors know it's vacant, anything valuable will disappear quickly. And then it becomes a safety hazard to others. And will need to be torn down.
Top

DaveO wrote: ↑
Wed Nov 11, 2020 12:06 pm
Unfortunately once the neighbors know it's vacant, anything valuable will disappear quickly. And then it becomes a safety hazard to others. And will need to be torn down.

I highly doubt this would be the case, as so many towers in "sketchy" areas stood empty. Not to mention the worst that will happen is it gets boarded windows.. if CSX still has a presence in the tower (for storage or what not) I do not see this being an issue even in Delray. It will get tagged at some point, maybe broken windows, but in my opinion it is a useful building at that location to store even just tools/ supplies. Plus the tower basically looks empty on its own, all of the shades are always closed, the only give away would be the lack of car in the lot.
"Ann Arbor 2373 Calling... Milkshake. Over" 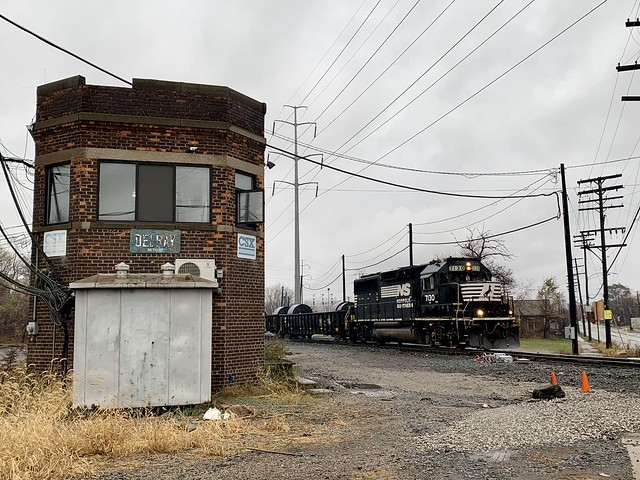 Word locally is that the tower will be open a little longer. Operators' last day is supposed to be Friday. Tower sign facing Dearborn Avenue was removed by a railroad worker this morning. It was made of plywood with raised letters cut out of plywood. Most older signal cabinets have been uprooted by backhoe.
Top

The towers last day of governing train movement was this last Monday. The operator is there just for “advice”, if needed.
Top

John D. was a good guy. He passed away a few years ago and I miss him and his dry wit and life stories.

The leverbed was impressive, as you'd expect at a busy and complicated junction like Delray. In the later years, the black levers were switches, the blue were switch locks, and the brown were out of service. The home signals were all the pistol grips up at the top. Lever 55 was the "direction lever," but I'm not exactly sure how it functioned.

The operator also had optional manual control over the gates for Dearborn Avenue. This home made switch kit allowed them to raise the gates individually. When the Conrail crossing was rebuilt around 2006(?), the new automated circuit removed the operator's control of the gates. The gate relays were in the first floor of the tower and you could always head them clicking through the floor when they activated.

Efforts are being made to preserve as much as possible to museum/historical preservation groups, preferably local.
Top
Post Reply
12 posts • Page 1 of 1