by GP30M4216
I'm looking at taking a trip on Amtrak's Cardinal this summer, round trip from Chicago to Prince, WV, to railfan some on the CSX in the West Virginia mountains. I know we have several posters here who have railfanned out of state, so I'm looking for your help if you know anything about my little plan!

I enjoy following along with Amtrak's long distance network of trains and have noted that the Cardinal is one Amtrak's least used trains, thanks mainly in part to it's three-runs-per-week status. I've also noted based on data from January 2008 that ridership was up 24% over the previous January, and a 17.7% increase occurred between Oct-Jan FY08 vs. the same time in FY07, making it one of the fastest growing Amtrak trains percentage wise... good news!

I understand that part of the route the Cardinal follows through Indiana is the old Monon route, which is home to a few stretches of classic Monon era semaphores still operating. About how many blades does the Cardinal pass? I'm hoping to stand at the rear door of the last car and get some photos of these last blades as I have a number of times on the Southwest Chief between Raton and Albuquerque, NM where about 64 former AT&SF blades remain in service. I'll be doing this on my westbound journey, because the sun should be up by that point in the morning.

Any information about the Cardinal, the semaphores, or any other tips or information would be helpful. It's a journey I've never taken but am looking forward to. Finally, if anyone has ever spent time watching trains on the CSX at or near Prince, West Virginia on the New River Subdivision and would like to share any information they have, it would be most welcome. I have no idea what kind of traffic CSX runs through here but I'd like to see some railroading in the mountains! Thanks!
by thomas
there should still be a fair amout of semophore's between crawfordsville ind. and monon ind.
as far as trains in the prince w.va expect 80% coal trains there are a FEW manifests Q302 and Q303, the last i knew they were running around 8 coal trains each way,
hope this helps
by cnw8835
I'll have to go look for the info, but last I can remember, the area around Prince, WV saw about 20 trains a day on the high end, mostly coal trains. There is also an RJ Corman operation in the area now which I believe is the line that splits off at Meadow Creek about 15 miles west (physically north) of Hinton and 10 miles east of Prince.
As for the semaphores, I believe there are 4 dual sets and 1 northbound only between Lafayette and Linden. No semaphores remain north of Lafayette towards Monon. There are more signals south of Linden towards Crawfordsville, including a shorty set in Crawfordsville itself. I should be down in Lafayette again soon and while there I will be trying to catch Q643 and J726 going through those signals anyway so I should have more info for you. 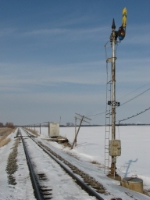