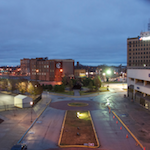 An interesting development has occurred in EC. It is reported that CN wants to construct a storage yard for their BP petcoke traffic in EC's Calumet neighborhood. This is causing a bit of a public freak out because of its proximity to homes in the Calumet neighborhood, the Grand Calumet Restoration wetlands and IDEM's USS Lead Superfund site, located inside an impoverished residential neighborhood. From my understanding, this location is east of Grassilli/Shearson, along Gary Avenue - which is north of the former Cudahy plant site. The article states that CN wants to fill in some wetlands in the area, to the ire of environmentalists.

Personally I think the project is cool, being a rail fan and all. But as much as I would like to see the Grassilli area jumping again, I have to side with the residents and environmentalists. This plan is socially dense and politically shortsighted. I understand that CN has to put the petcoke somewhere, and that the closer they are to BP the better it would be for their bottom line. However, this area is not far enough away from the ailing polluted Calumet neighborhood. Just going a bit more east and choosing Gary for their new yard would make more sense, in my opinion.

North Gary has all the space they need for such a project and the areas that could be used for petcoke storage are miles away from the nearest neighborhoods and already polluted (sad but true). They could develop the property behind AMG Resources, an iron scrapper, east of Cline Avenue near the CN Cavanaugh wye. That land is owned by the Gary Redevelopment Commission. I'm sure they would be more than accommodating as long as CN can assure that the Grand Calumet River will never be polluted. I'm just brainstorming, but I would like to know where any materials related to this plan can be obtained.

https://www.nwitimes.com/news/local/lak ... yDSkxQrnsI
“...what thrills me about trains is not their size or their equipment but the fact that they are moving, that they embody a connection between unseen places.”
― Marianne Wiggins
Top

Grasselli interlocking in East Chicago has newmultit-aspect signals up, with activation forthcoming. A CN switch east of there has equipment on the ground for construction.
Top
Post Reply
2 posts • Page 1 of 1