LakeATCS wrote:448 is Unique in that its got a Hayes power derail, and not a switch machine powered split rail.

The IN Tek derail is down the hill ... Gavilon's derail is manual and east of their dwarf signal.
I don't know if they have been replaced since July or are being replaced today. (I'd expect those dwarfs to be replaced.)

All of the track work (non-signalling) should have been complete at CP 437 a couple of years ago when they installed the new signals and switch heaters. It is hard to see what they have changed from the ground due to the embankment ... but Google Earth shows the changes from the sky.
Top

That would make sense, as all of the switch bits were blank for a while.
Top

448 has, or at least had a power derail on the south lead.

Though now that I look, 448 has all 5H machines except for that Hayes power derail on the south lead.
Top

They're sending trains now to 448 and 426, have not yet released them through those points
Top

IN Tek / IN Kote new dwarf and power derail.

One of this evening's parade of eastbound trains waiting for CP 437 to reopen.

As of 5pm only the intermediates at 440 were changed out. The other three locations still had old signals lit.
Apparently the railroad is expected to reopen by 8pm.

There was also work underway at CP 423 but I did not catch what they were doing. The dispatcher was asking the foreman to set routes through the plant.
Top

448 was unique in that it had one of the few power derails I have ever seen.
I guess I should explain.

A split rail is a switch used to derail cars.The diverging route is replaced with rails that end, dumping anything needing to be derailed directly onto the ties. There are a couple versions. One has a complete set of points, the other only has one set of points. There are a FEW that even have a frog with a tail track designed to dump a car in a designated "Safe spot"

A derail is a device that slides up over the rail that lifts the wheels up and off the rails. CP 448 had a rare CTC version of one of these. Made by Hayes.
This is the same model that was at 448 installed elsewhere. 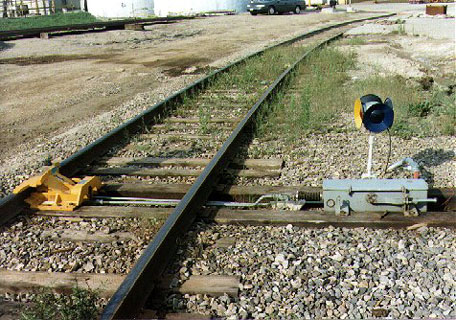 Derails that slide up on the rail head have fallen from favor as they can and DO simply just get kicked off the rail by rolling cars. This happened in the famous 8888 runaway in Ohio when someone attempted to derail the runaway with a clamp on derail.
Top

Perhaps 448 will be done Monday as well? There were crews at CP 448 and all of the intermediates today but they may have been just making sure the signals sent from CP 437 were displaying the correct aspects during testing.

That powered split rail has been there for decades. I am surprised that the split derail isn't in the 1997 charts. Back when I was young and stupid in the early 90's I remember walking down the tracks to that derail. It was one of the first split track derails I remember seeing.
Top

The drawing in the charts is from 93. I do distinctly remember it being a power derail at one point. I think Conrail put 448 in about 1993.
Top

Have we seen a test address for CP 448 yet? If not, past history would not even having it done next weekend.
Top

I have not seen one.
Top

Wow, NS being generous. CN on 2 will be the first movement. Followed by a CN on 1.
Top

tttodisp wrote:Have we seen a test address for CP 448 yet? If not, past history would not even having it done next weekend.

I thought I was seeing that. The first five rows fell together nicely trying to figure out the decode. Practically identical to the old MCP. I am just starting to look at row seven and eight. I like the extra visibility.
Top

Are we seeing anything different at CP 448 today?
Top

They're working on it, also stringing up a high tension electric line across the tracks Is there supposed to be a CP 446 or 447?

New eastbound mast signals at 448 installed with 3 heads each. The bottom head is bagged and has 4 lights, similar to CSX signals
Top

Negative on bit changes at 448. probably not until they install a new machine. Even though it's a newer GE Series 6 machine, it's incompatible with i-ETMS
Top

LakeATCS wrote:Negative on bit changes at 448. probably not until they install a new machine. Even though it's a newer GE Series 6 machine, it's incompatible with i-ETMS

There are new cabinets at CP448 next to the old ones ... so the new machines are probably there waiting for the command.


9xs wrote:They're working on it, also stringing up a high tension electric line across the tracks Is there supposed to be a CP 446 or 447?

That is not for the railroad. That is to connect to the new power plant by CP 448 at Walnut Rd. There is a substation at Smilax Rd (east of Walnut Rd).
Top

Does the olivers lead no longer have an approach circuit? I didn't see one in testing or today.
Top