CFE 3889 visited Grove City tonight at 18:30 PM.....Looks like the I&O came up to switch out Nexeos with the usual plastic hoppers.
Exit stage left
Top

On a average how many trains come from Norwood to Washington Courthouse per day? In the summer I did hear at least three trains on the tracks two going up one coming back mostly hoppers when I did see them. At one time this was a very active track. I know there is a steep grade from Madisonville to Maderia along Camargo Road going north east.

Is the end of the line at Washington Courthouse or is there a cut off somewhere there. I know many years ago the line went past WC.
Top

The line runs all the way to Columbus. There is a small yard in Midland and that is where the line heads to the North through Washington Court House. The Greenfield Branch heads East from Midland and used to go to Chillicothe and on to West Virginia until Chessie`s big wigs made a very bad decision back in the 80`s and pulled the tracks up and dead ended the line at Greenfield. That is a bonehead move that they regret to do this day. The trains run mostly at night, and early morning, nothing like they did back in the day when I grew up but a mile and a half from the tracks in Loveland. It was nothing to see 20 trains a day go up and down that line. When the Norwood GM plant closed up, things really slowed down and now you got basically a ghost of days gone by. It`s truly a shame what has happened to the Midland Sub
Top

So do any passenger trains run out of Cincinnati to Columbus on this rail any longer?
Top

Nope. the Amtrak Cardinal used to run on it back in the day till they pulled the tracks to Chillicothe. We used to try and race it out in the country but it was way to fast to keep up with. One engine and 3 cars and it could fly. The Midland Sub is uphill till you get to Pleasant Plain than it levels off. Even today the Indiana and Ohio occasionally has to use pushers to get up Madeira hill and they usually uncouple them out around Pleasant Plain or Butlerville. It doesn`t happen often but it does happen.
Top 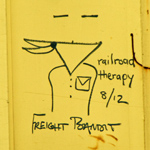 Acutally, the Amtrak train that ran from Cincinnati to Parkersburg was the Shenandoah (Train 32/33), not the Cardinal. The Cardinal still runs its Chicago, Indy, Cincy, Huntington, Clifton Forge route over CSX. The Shenandoah never ran to Columbus and was discontinued a few years before the B&O was abandoned.

The Shenandoah had a typical consist of a P30CH and three cars, usually coach, a dinette and another coach. Used to see the train in Chillicothe on the way to my Grandparents in Jackson, usually east of Chillicothe as it rocketed into town.

Fly it did...the was scheduled to cover the 400 miles between Cumberland and Cincinnati in 11.5 hours with 8 station stops...that's an average speed of 36.5 miles per hour over some pretty intense railroad east of Chillicothe.

cumbres wrote:Nope. the Amtrak Cardinal used to run on it back in the day till they pulled the tracks to Chillicothe. We used to try and race it out in the country but it was way to fast to keep up with. One engine and 3 cars and it could fly. The Midland Sub is uphill till you get to Pleasant Plain than it levels off. Even today the Indiana and Ohio occasionally has to use pushers to get up Madeira hill and they usually uncouple them out around Pleasant Plain or Butlerville. It doesn`t happen often but it does happen.

See all of my photos at: http://www.flickr.com/photos/cgtower/
Top

Yes many time I have seen pushers pushing long trains up the hill from Madisonville to Maderia and they really have a hard time. I guess the speed limit in Madisonville is such they can't get enough power to make the grade to Maderia. I know there is one train that goes though Madisonville around 7:00 a.m. in the morning heading east. Then there is one that comes back west around 9:00 a.m. but that varies weekly. Not sure how many more trains run on that track daily.

I did now many years ago there was a passenger train that ran on the Old B&O rail and it did fly. Short and quick in Oakley and parts west. Looks like soon trains on the east side of Cincinnati are going to be a thing of the past if something doesn't give. All we see here are short lines and on the old B&O a CSX train every now and then.
Top

Depends on the time of the year how many trains you see on the Midland. In theory there should be a Wash CH Turn out of the yard five nights a week to Oakley/Norwood and back. During the summer they run the Melvin Rock Runner train out of Undercliff to Melvin. Not sure if it's a five night a week job too when it's running. I think it's 15 cars or less. Wash CH Turns seem to be running around 20 to 50 cars. Which is probably about right for this time of year. Depends if the DDG is moving out Valero.

Indeed there's a grade at Madeira both directions. East bounds out of Cincy have more problems because they don't get much of a start up the hill. At the moment there's slow order on the grade that really hurts them. That and the DT&I South 10 mph slow order from Springfield to South Solon are part of the reasons they started using the Dayton Dist for the pig iron and P&G traffic last year. WESTCO has a project out for bid to get the DT&I South fixed the I&O is supposed to be working on Madeira hill soon.

Thanks for the info. I learned a few things here tonight. I agree the rail going east out of Madisonville is pretty tough as trains don't get enough speed to make the grade. Man sometimes they really have a hard time getting up and need a pusher from the rear...There is a train that comes back with at least 45 to 50 cars on it in the summer. Its good to see trains running on the line and I hope it continues

Back in the day the B&O was a very active line that was back in the 70s. Several trains would be going up and back per day. When I was younger and in high school I had a part time job at Frito Lay in Madisonville. Trains would be flying by that place several times a night.

I guess the CSX still has plenty of customers good to see they are doing well.
Top

At 7:05 am this morning CSX was going east out of Madisonville with a good 30 plus hoppers
Top

You realize your seeing the I&O correct? CSX owns the land and leases it to the I&O. Only time you will see CSX power down by you is if the I&O is super power short and "borrows" it from a grain train and makes a run to Cincy and back with it.
Top

Understand yet the CSX was in the front yesterday.
Top

Then it was a CSX loco off a grain train that the I&O was using on something else.

heypal6878 wrote:Understand yet the CSX was in the front yesterday.

There have been times when CSX has run trackage rights trains down the Midland from Columbus. In fact there are even a few videos posted on Youtube of them. It`s been a long time since I`ve seen one in Loveland, but it happens once in a great while.
Top

Actually CSX only has trackage rights over the Midland from Russ in Columbus down to Haynes on the Midland (about 10 miles or so north of Wash CH). Since NS won't budge on granting trackage rights to the I&O for a couple of miles in Columbus so they can reach the old C&O and Parsons, CSX had to be given trackage rights over the I&O. All of the unit grain, ethanol, fertilizer and the new stone trains for the Logan Sub are swapped with each other at Haynes. Horrible set up with just a 4600 ft siding there to try and pull it off, but they've been doing it for ten plus years now. With the unit trains it's probably getting up to 150 or so a year now. Those Youtube videos are grain trains for Haynes.

They only time CSX has used the Midland since the I&O took over was a short 6 weeks back in 2008. CSX had the I&O move two loaded autorack trains most days from Cincy to Columbus while a track project was going on the Toledo Sub. They moved at night and with the new L&I deal CSX has I doubt you ever see anything from CSX moving over the Midland again.


cumbres wrote:There have been times when CSX has run trackage rights trains down the Midland from Columbus. In fact there are even a few videos posted on Youtube of them. It`s been a long time since I`ve seen one in Loveland, but it happens once in a great while.

Next time I will take a picture!
Top

What kind of hoppers did you see on that train? I think you saw the Melvin stone train with one of the Helm lessors in the all blue scheme.


heypal6878 wrote:Next time I will take a picture!

That was it!
Top

I figured it might be that since Melvin is loading stone for their Cincinnati transload in Undercliff again.

Midland is reopen after almost a week being shut down west of Wash CH. Car with a mechanical failure derailed and tore up a good mile plus of tracks. Balfour Beatty crew worked from last Wednesday evening thru today on it. Train stopped a mile or so short of the defect detector at MP 73.

WESTCO put a project out for DT&I South for Springfield yard limits to South Solon. Project is to raise track speeds back to 25 mph.
Top

Drove by Keynes mill and saw a bunch of grain cars. They have been switching 15 or so out at a time for them this week. Also saw several box cars don't know what they were doing on the logan sub. Usually smeads only gets a few at a time.
Top
Post Reply
370 posts