I know I haven't posted anything here in years, but after some railroad exploration in western Alabama I got an idea... 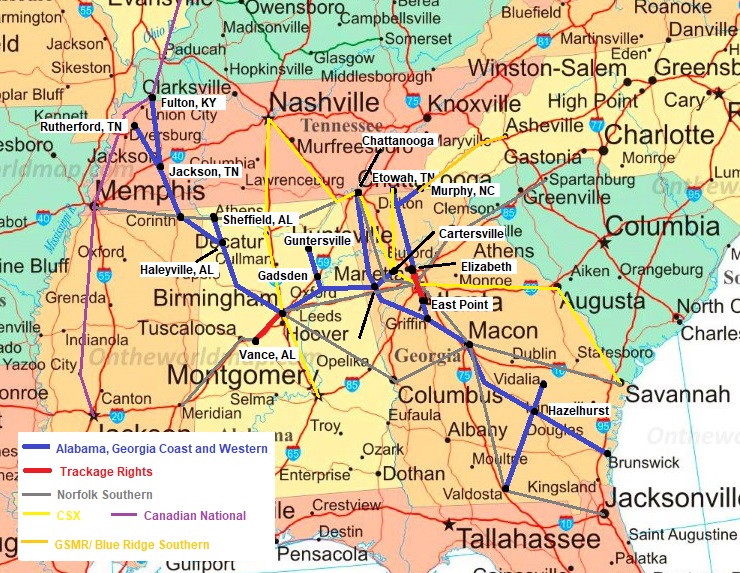 In 2013, Sunshine Mills put its railroad, the Redmont Railway between Corinth, MS and Red Bay, AL up for sale. Instead of purchasing only the railroad, Culver and Robinson, an investment firm based in Huntsville, AL, purchased both the railroad and Sunshine Mills itself. Traffic was light on this section of track, as it was during the line’s independent years since it was spun off from NS in the early 90s, and while they looked for ways to grow the business, minimal additional traffic developed along the line.

By 2018, with President Trump’s tariffs impacting Chinese imports and manufacturing shifting to Africa, Culver and Robinson became involved in another investment opportunity: an intermodal facility at the Port of Brunswick, GA allowing for container ships to be loaded and unloaded. The Golden Isles and Western Railroad, owned by Southeastern Rail Holdings, was to serve the intermodal facility, and was planned to provide international intermodal service from Brunswick to East Point, GA. East Point was the site of a container terminal operated by another Southern Rail Holdings property, the High Point and Rome Railroad, located on the former NS Triple Crown facility.

A senior investor at Culver and Robinson noticed a major opportunity to grow business on the Redmont Railway: expanding far beyond its current 41 mile reach to be an important link in a new intermodal service between Chicago and Brunswick. This would require major restructuring, linking 4 shortline railroads to connect Brunswick with the Canadian National at Fulton, KY. A series of meetings between Culver and Robinson, Southeastern Rail Holdings, the West Tennessee Railroad, and Canadian National were held in Corinth, MS, ultimately leading to the creation of a new railroad.

The new railroad, called the Alabama, Georgia Coast, and Western Railroad would effectively be a merger of the 3 Southeastern Rail Holdings properties, the Redmont Railway, and the West Tennessee Railroad. Ultimately, Southeastern Rail Holdings would own 51% of the new company, with the remaining 49% being split evenly between Culver and Robinson, the owners of the West Tennessee Railroad, and Canadian National. The combined railroads, spanning from Fulton, KY to the Atlantic Ocean, would begin operations on December 1, 2019.

There was, however, one minor sticking point: 31 miles of the necessary railroad did not exist – there was no longer a connection between the Redmont at Red Bay and the High Point and Rome at Haleyville, this section of track being abandoned by NS in the early 90s. Additionally, the remaining portion of this line was in very poor shape, consisting of 90 lb jointed rail and a continuous 10 MPH speed restriction. Once a deal was reached to form the new railroad in April, 2019, reconstruction began. The line was completed in February, 2020, seven months before the upgrades to the Port of Brunswick were completed.

Initially, the newly reconstructed segment between Red Bay and Haleyville was lightly used. With a mild winter and spring, a coal train only ran to Plant Wansley about once a week, and there were no online customers between Red Bay and Haleyville. Two grain trains between Trenton, TN and Surrency, GA also ran during this time period, along with a power move from Cedartown, GA to Fulton, KY (and ultimately to NRE at Paducah) consisting of many of HPR’s 6 axle EMD units. Due to the positive experiences with GEs on the South Georgia Central Railroad, the Golden Isles and Western, and the West Tennessee Railroad, it was decided that primary road power on the new railroad would primarily be second hand high horsepower 4 and 6 axle GE units. The only EMD road power retained from HPR was a group of 8 SD40T-2s, 4 SD50Fs, and 15 of the 20 SD40-2s owned by HPR.

Once the Port of Brunswick updates were completed in September, 2020, through trains running the entire length of the AGCW mainline began. The first train departed Brunswick at 0400 EDT on September 24, 2020 with three B39-8s and 57 intermodal platforms (just over 4700 tons). The train was handed off to the CN at Fulton on September 25 a little before 0600 CDT, a run time of just under 27 hours, only being held for crew changes, a meet with an eastbound at Ragland, and to wait on BNSF to clear the diamond at Jasper, AL. Crews were swapped at Macon, Cedartown, and Haleyville. The first train to East Point departed on September 25 with a B36-7, SD40T-2, and 39 platforms.

The lines operated by the Alabama, Georgia Coast, and Western break down as follows:

AGCW utilizes trackage rights over NS between 22nd Street and Vance, AL to operate autorack trains from Brunswick to the Mercedes plant at Vance. This job is run by a AGCW crew out of Cedartown between Cedartown and Vance.

Between East Point, GA and Elizabeth, GA, trackage rights over CSX are used.

By the current date (September, 2023) all locomotives have been re-numbered into the standard AGCW numbering scheme, although many locomotives retain the paint worn at the time of the merger.

Well thought out and detailed!
PatC created a monster, 'cause nobody wants to see Don Simon no more they want AARR I'm chopped liver, well if you want AARR this is what I'll give ya, bad humor mixed with irrelevant info that'll make you roll your eyes quicker than a ~Z~ banhammer...
Top
Post Reply
2 posts • Page 1 of 1