I really started this thread on the Historical board, specifically the Mackinac Bridge, What If question. So, how might the rail map have been different if the early '50s plan to include a single track on the bridge's lower span actually occurred. Obviously, the former Soo Line, nee DSS&A line from Trout Lake to St. Ignace would have remained, along with one or two of the Penn Central routes into Mackinaw City. However, ownership changes due to merger would have likely changed things, even under this alternate history.

My "theory" is that the DSS&A was sold to the NP by CPR interests as a condition of the new SOO merger in 1960. The NYC-PRR marriage into Penn Central still occured in 1968, and two routes from the south were maintained due to growing traffic flows brought on by the new direct rail crossing. A sizable maintenance and upgrade program had followed the bridge opening, with better ballast and heavier rail on all three routes, primarily the South Shore from Ashland, WI to the Straits and the NYC south - as the PRR was the less favorable routing due to it's close proximity to Chicago.

Into the '60s CTC was installed on the NP from Superior, WI to Ashland, and then eastward along the South Shore to St. Ignace, and the NYC reciprocated with TCS (their "flavor" of CTC) southward to Detroit via Bay City-Saginaw and Vassar. Heavier loads as 100 ton cars came online started a welded-rail program, with unit coal, grain and all-rail ore moves heading south into the Detroit markets (and beyond) to avoid the terminal delays associated with Chicago routings. Joint passenger service was likewise maintained along the route - with a daily run and seasonal trains added to support the growing influx of vacationers to the North country.

Following the BN merger in 1970, traffic levels continued to grow - despite the worsening woes of the PC. Passenger service initially ended on Amtrak Day, but later a state-supported 403(B) service was instituted Toledo-Detroit to Duluth-Superior, WI and all points in-between. Following April 1, 1976 the Detroit-Mackinaw City former NYC route was kept by CR, but the former PRR was downgraded and abandoned in spots due to a less-favorable routing to the west. The status quo was pretty much maintained until deregulation under the Stagger's Act, at which point neither Conrail nor Burlington Northern liked the idea of being "shorthauled" by the other road - CR on eastbound moves and BN on westbounds – and declining traffic flows were the inevitable result.

Once carloads began to decline into the 1980s, so too did maintenance as marketing and capital dollars flowed elsewhere across both major systems. Come the late ‘80s both roads were passively shopping the route to investors interested in starting a regional carrier at best, and preparing abandonment application documents for the ICC at worst. Luckily, a group of capitalists – lead by an industry veteran and visionary – became interested in this soon-to-be BN-CR castoff and made an offer for the property. Hence, the Detroit, Mackinac and Marquette Railroad was reborn in the late Twentieth Century.

Operations began with leased power from the DM&M’s predecessor roads, and soon patched, second-hand BN and CNW power began to show up on the property. AMTK service continued with improved running times due to track upgrades thanks to Federal and State grants and loans to fix years of deferred maintenance and relentless pounding by unit trains, which continue to this day. Traffic continues to grow as transit times via the Chicago terminal worsen due to antiquated infrastructure, traffic congestion and long yard dwell times. The DM&M’s marketing department is out pounding doors and shaking the rust off of inactive sidings, the result a growing business for a growing regional railroad.

Now traffic has come full-circle with run-through BNSF and NS interchange traffic polishing the DM&M’s rails on a daily basis. Chicago is still a mess to this day, but the Detroit, Mackinaw and Marquette has a bright future in this vital and growing industry – one that is likewise vital to the State of Michigan as bothersome truck traffic continued to shift to the rails between the two peninsulas and beyond.

So, how’s that for a brief history and press release on the start of my new proto-freelanced 1:87 model railroad, soon coming to a basement near you.
D.M. Mitzel
Div. 8-NCR-NMRA
Oxford, Mich.
Top

I like it. Maybe I missed it but what are the end points of your system? Branch lines?
PatC created a monster, 'cause nobody wants to see Don Simon no more they want AARR I'm chopped liver, well if you want AARR this is what I'll give ya, bad humor mixed with irrelevant info that'll make you roll your eyes quicker than a ~Z~ banhammer...
Top

The DM&M acquired the following main lines (eastward and to points south):

That's quite a bit of track, but helps explain how the DM&M RR grew into the viable regional railroad it is - as well as an important bridge route between BNSF's northern Hill Lines and Norfolk Southern's anchor routes in S. Michigan. I'm really leaning towards modeling the road as it was shortly following startup - all patched second-hand locomotives with initially no power painted in DM&M colors. Mostly, because I have no idea what the DM&M's new scheme would look like, and secondly because I like the BN and CNW schemes. With a simple patch-out of the old heralds and some stenciled reporting marks I'm in business, literally.

As for modeling the physical plant, I'm looking at Oxford proper as a base of operations. With two active interchanges - CN's former GTW Cass City Sub, nee-PO&N and the junction with the former NYC Flint Div. - as well as large upper and lower yards I think it would make an interesting kernel of operations to model. I'd model it with the gravel and sand pit operations still fully functioning in town, along with other local industries like lumber transloads, grain and feed mills as well as some light manufacturing. With "only" 13'x27' to work with, Oxford and a short stretch of the branch to Flint will likely fill the space nicely, without being overly crowded.

Now, to get on with bugging Charlie Whipp about those NYC valuation drawings of Oxford so that I can soon get pencil to paper and compress everything to what's manageable in 1:87 scale within my available space. I'd like to start getting benchwork up after Thanksgiving, or during Christmas week at the latest. It's been years since I've had an operable layout so I'm anxious to not lose any more time - the itch to crack a throttle is getting worse by the minute. Anyway, I hope to have something to show soon - even if it's only drawings at that point.
D.M. Mitzel
Div. 8-NCR-NMRA
Oxford, Mich.
Top

Cool, I like it. Do you have trains schedules? Major customers?
PatC created a monster, 'cause nobody wants to see Don Simon no more they want AARR I'm chopped liver, well if you want AARR this is what I'll give ya, bad humor mixed with irrelevant info that'll make you roll your eyes quicker than a ~Z~ banhammer...
Top

I haven't thought it out to that level of detail, mostly. Major freight commodities would be all-rail taconite iron ore unit trains from the Twin Ports (Duluth-Superior) off of the BN and DM&IR, as well as some moves from the Marquette range originating on either the CNW or LS&I. The occasional ACR train via the Soo could likewise head south, after turning on the wye at Trout Lake, MI. Unit coal from BN originating in the Powder River basin via Duluth-Superior, as well as lots of unit and block grain moves via the Twin Ports would traverse the DM&M rails as well. Other than that, whatever carload traffic passing through or originating on DM&M customer sidings would fill out the freight traffic.

The Amtrak 403(B) trains would be numbers 394-395, the remnants of the old NYC Northerner train that ran from Detroit's Michigan Central terminal north to Mackinaw City, MI - meeting the South Shore train west to the Twin Ports. AMTK 394-395 now runs the entire route to Duluth-Superior, and also originates in Toledo (Central Union Terminal) to begin its long run north and west. Superliner reserved coach service, along with a diner and checked baggage as added amenities are provided to the traveling public. Lately, calls for sleeper service have been growing - due to the long distances and running times involved, as well as the overnight schedule. This may happen, but the state DOT and NRPC has been mum to this point.
Last edited by dmitzel on Thu Oct 28, 2010 5:30 pm, edited 1 time in total.
D.M. Mitzel
Div. 8-NCR-NMRA
Oxford, Mich.
Top

Ok - long but interesting read...but I like the detail

BTW - for about a year or two in 1968/69 AA interchanged ore with M&LS on a daily schedule. It was either 20 or 40 (probably 40) cars per day. M&LS got the ore from LS&I. It required AA to MU one of their RS1's and send it to M&LS cause their single S3 was not enough power.
PatC created a monster, 'cause nobody wants to see Don Simon no more they want AARR I'm chopped liver, well if you want AARR this is what I'll give ya, bad humor mixed with irrelevant info that'll make you roll your eyes quicker than a ~Z~ banhammer...
Top

Thanks for the commodity ideas - I had no idea the M&LS-AA ever handled ore traffic. Interesting routing, and could make for a neat prototype-freelance concept in and of itself.
D.M. Mitzel
Div. 8-NCR-NMRA
Oxford, Mich.
Top

Looks like the DM&M-MCRR "paper" concept is one step closer to reality, following my long trip yesterday to the Saline train show. I've got a bead on a copy of the PC Detroit Division station maps for the Mackinaw Branch, which would make up the lion's share of the road's trackage in the Lower Peninsula. Since I'd be focusing my 1:87 scale efforts in the Oxford area, these maps are literally the "holy-grail" for prototype modeling.

Prior I've only had scattered photos and Sanborn maps depicting this line's physical plant, the latter notorious for being less than accurate as far as track plans go. Now, with these circa-1971 line drawings showing the track as it was per the railroad's chief engineer I can proceed forward comfortably knowing the resulting "LDEs" (Koester's layout design elements) are firmly rooted in reality.

All I bought at the show was a couple of hotdogs besides admission, but this particular gentleman's business card was the find of the decade IMHO. Whoo-hoo, I can't wait to get started!
D.M. Mitzel
Div. 8-NCR-NMRA
Oxford, Mich.
Top

More to come as track design, engineering and ROW work progresses from Winona Yard, Bay City, Mich. over to Midland and down to Zilwaukee (or thereabouts). The DM&M Ry. - the Marquette Route - is being reborn as an NS-CPR jointly-owned modern bridge route between the Twin Ports of Duluth-Superior (ex-DSS&A) and Sterling Yard (ex-NYC, now CR Shared Assets).
D.M. Mitzel
Div. 8-NCR-NMRA
Oxford, Mich.
Top

All the research and field visits to the former NYC trackage in and around the Tri-cities has paid off... 13'x27' trackplan complete, benchwork up and Homasote subroadbed down. 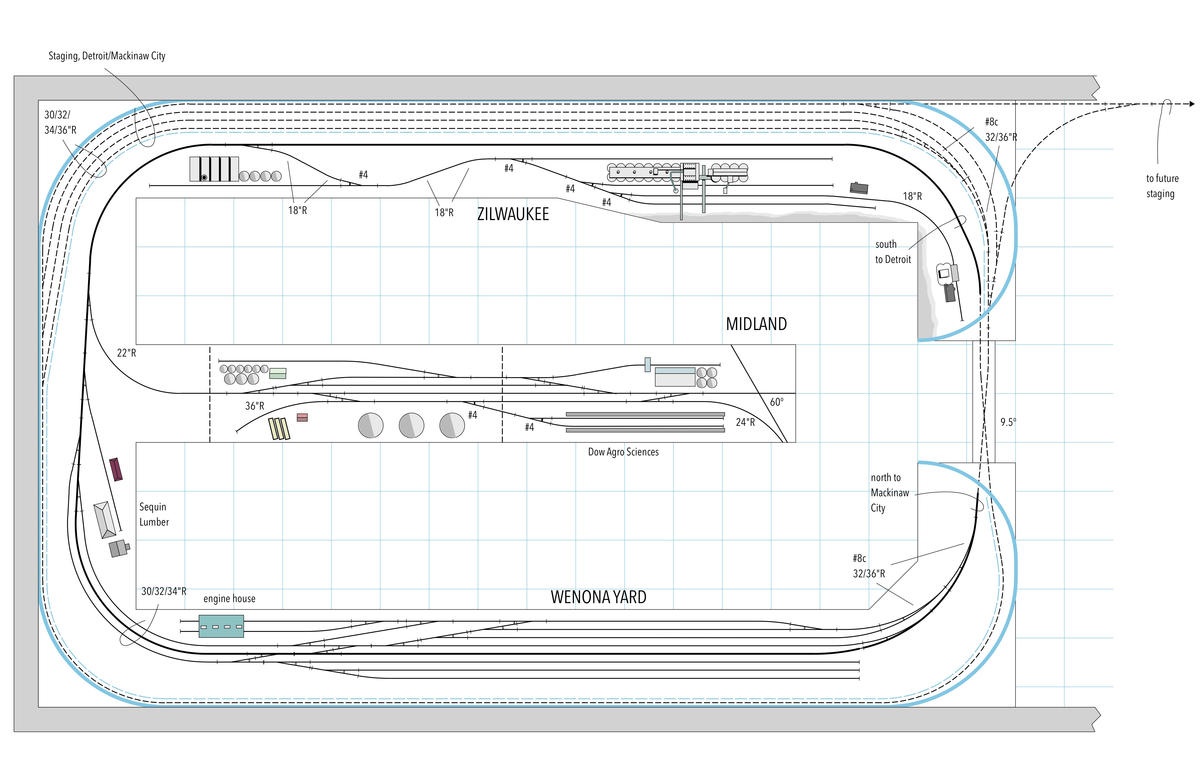 For those that are NMRA members you're welcome to sign-in at NMRA.org and visit the following page:

dmitzel wrote:All the research and field visits to the former NYC trackage in and around the Tri-cities has paid off... 13'x27' trackplan complete, benchwork up and Homasote subroadbed down.

PatC created a monster, 'cause nobody wants to see Don Simon no more they want AARR I'm chopped liver, well if you want AARR this is what I'll give ya, bad humor mixed with irrelevant info that'll make you roll your eyes quicker than a ~Z~ banhammer...
Top
Post Reply
11 posts • Page 1 of 1