News or chat about railroad info that pertains to the entire United States, another state, or country.
Post Reply
First unread post • 26 posts 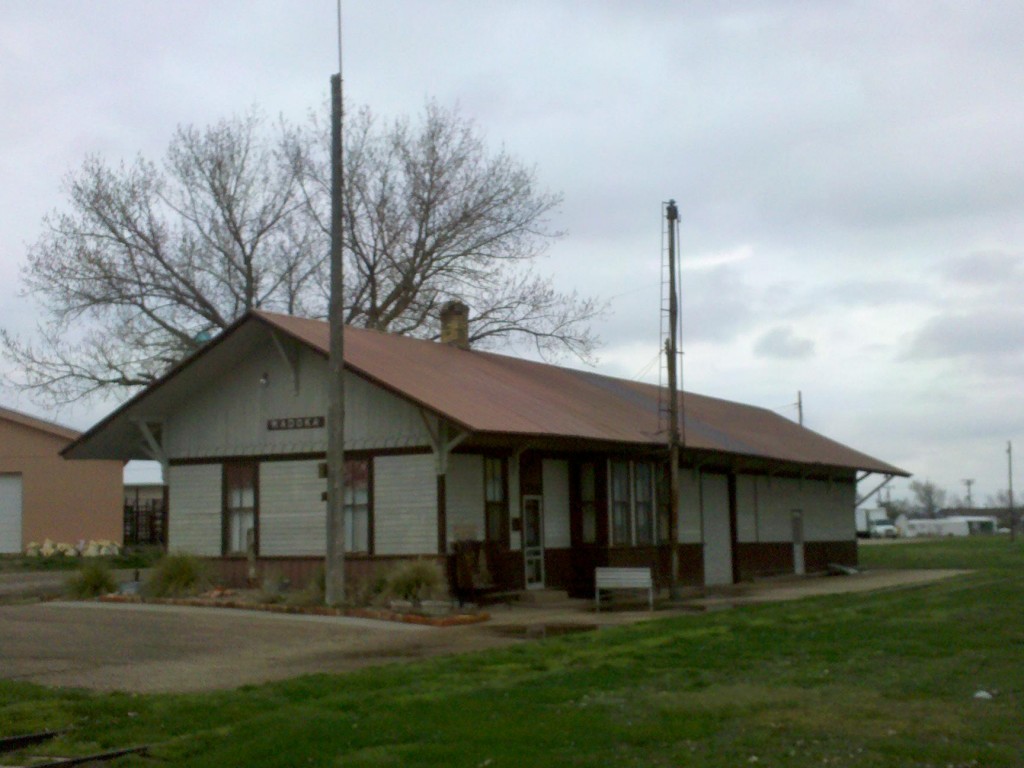 Kadoka, SD 4-20-10 the western most point on the former Milwaukee Road line from Mitchel to Rapid City. Tracks end just out of photo.

http://railroad.ml1.net/dsrc.html Limited pictures of the line in operation..a museum of ancient equipment at Chamberlain. Check out the train movements on rough trackage too.
"If I Harp at you, it is only to Spur you on!
Top

Alex Huff is one of the principles of DS and a former principle of MIGN. He contributes a lot of valuable info on another board.

Excellent post Larry.
PatC created a monster, 'cause nobody wants to see Don Simon no more they want AARR I'm chopped liver, well if you want AARR this is what I'll give ya, bad humor mixed with irrelevant info that'll make you roll your eyes quicker than a ~Z~ banhammer...
Top

There have been some changes in recent years. Alex Huff sold the line last fall. Limited grain hauling began again in 2007, out as far as Presho, but only after DSRC was able to get trackage rights to haul grain over BNSF from Mitchell to Sioux City, IA (one of the conditions when the State of South Dakota sold to BNSF the old MILW lines it had been leasing). They had to run at night in summer; due to the conditions of the track the heat of the day caused enough expansion to pose a major risk of derailments.

I have tried on occasion to get updates on this line but other than the Todd Schultz website, there is little information out there. I'm not sure if they even ran grain trains in 2008 or 2009, haven't been able to find out.
I can't even remember where I got the recent info above; might have been Yahoo Groups / Milwaukee Rails.

There are (or were) a few interesting locos at the headquarters in Chamberlain, including a UP DDA40X (or is it DD40AX?). On eastbound I-90 at Chamberlain, on the east side of the Missouri River, there is a rest area high on a bluff overlooking the river, with a great view of the railroad bridge and line looking west.

When exploring the grades in SD always keep this in mind...Sign at I-90 rest stop in Chamberlain. Taken 4-20-10 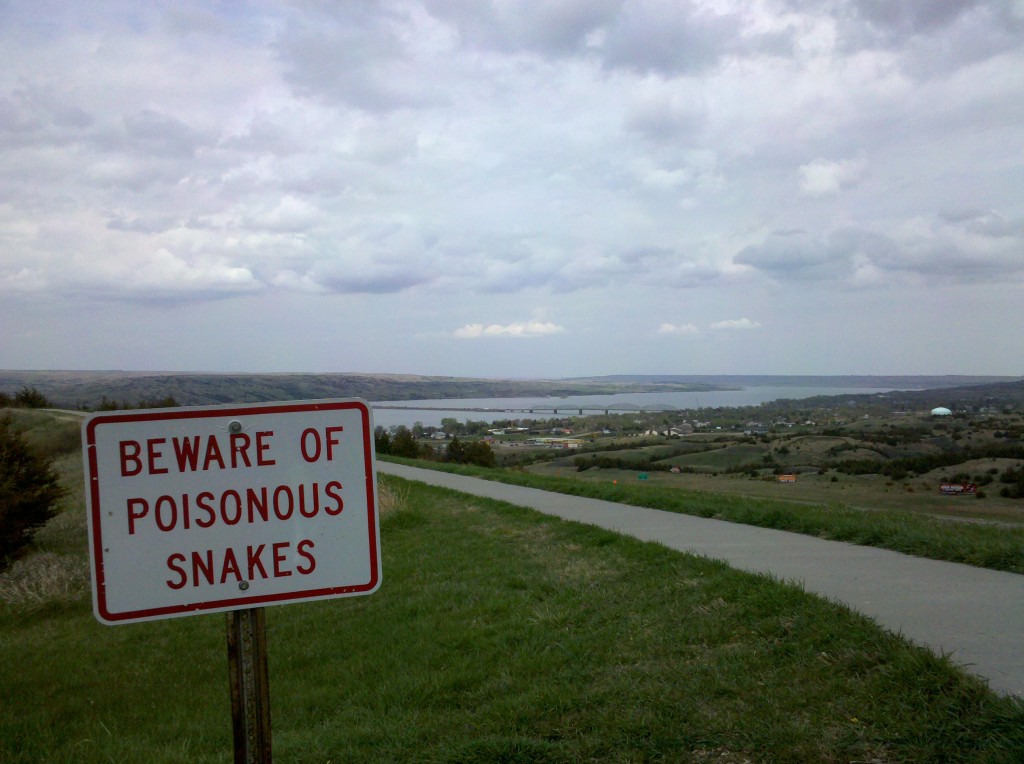 A couple more links to this line...

Larry G. said:
When exploring the grades in SD always keep this in mind...Sign at I-90 rest stop in Chamberlain. Taken 4-20-10

Good warning though, as rattlesnakes do occur in SD.
I have been to this rest area and it offers a great view of the Lake Francis Case Reservoir of the Missouri River.
Nice change of scenery after looking at endless corn and soybean fields in Eastern SD.

Jeff O.
Celebrating 7 and a half years dial-up free!

Caputa was the first station east of Rapid City on the old Milwaukee Road route across southern South Dakota. Today it is the end of the rail remaining on the ROW at the western end. Just east of here the rails were pulled up through the Badlands National Park to Kadoka reslting in about a 100 mile gap. SD Hwy 44 follows the grade out to Interior in the National Park. These rails were left in place with the thought of having a communter line between the Rapid City Airport and Downtown. As of spring 2009 the rails in these photos were still in place. 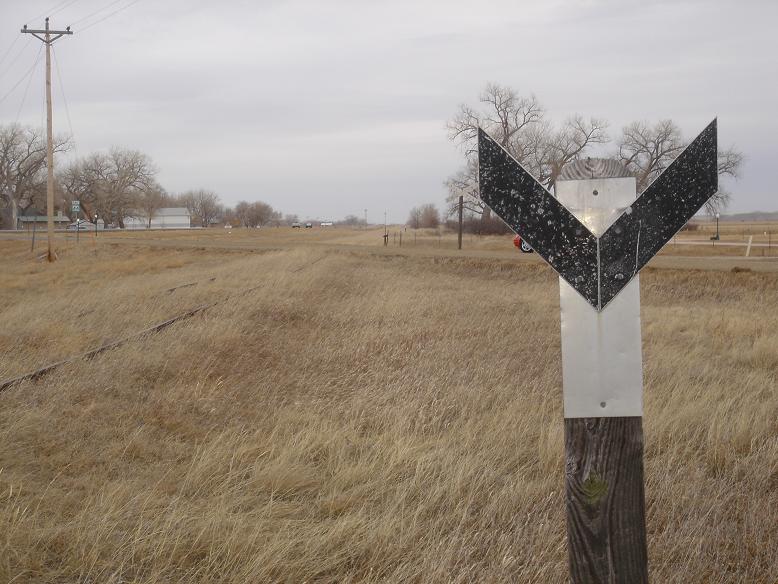 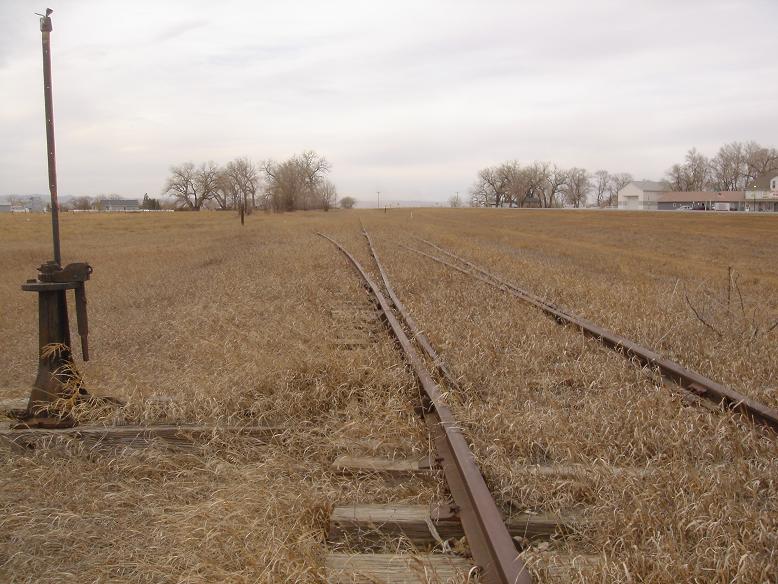 Looking WB towards the Black Hills and Rapid City 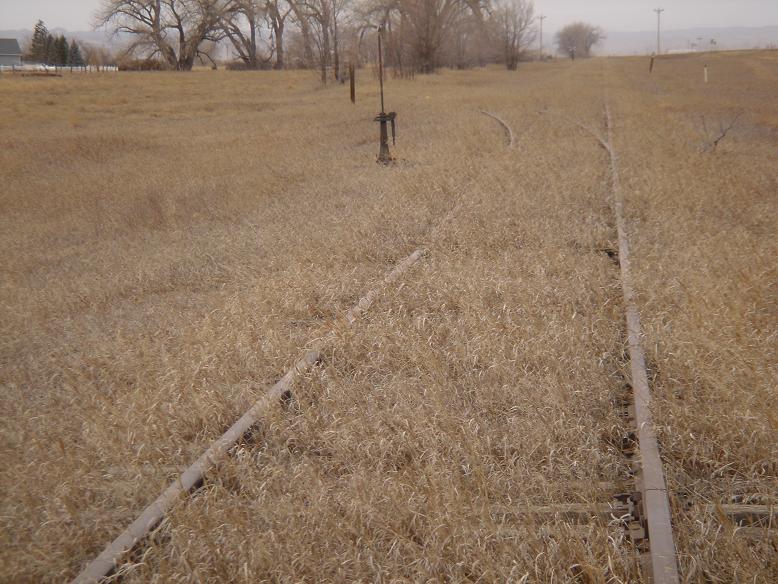 Depot Siding, trees are growing on the old depot site. 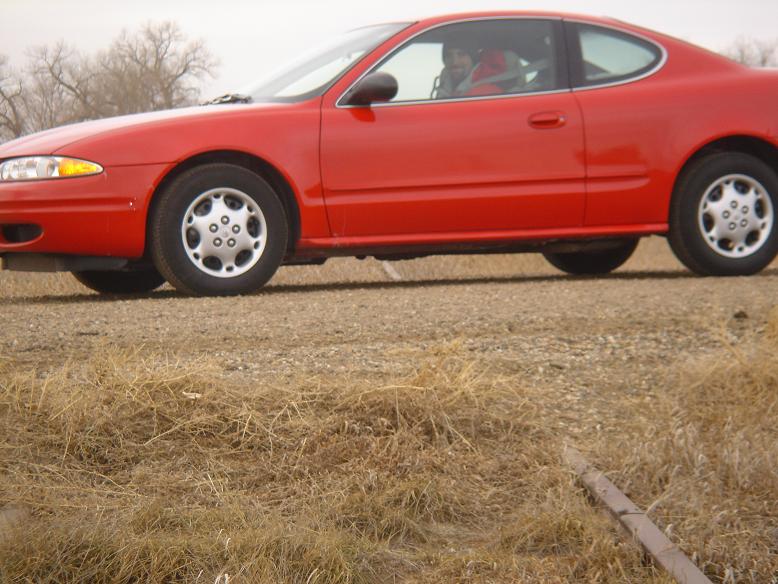 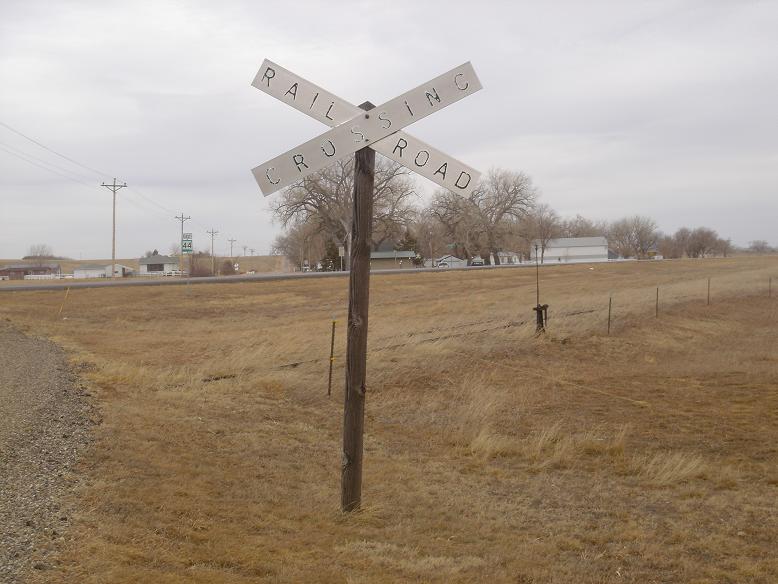 Great stuff Larry. Still reading the attachments to the original post.
PatC created a monster, 'cause nobody wants to see Don Simon no more they want AARR I'm chopped liver, well if you want AARR this is what I'll give ya, bad humor mixed with irrelevant info that'll make you roll your eyes quicker than a ~Z~ banhammer...
Top

Larry, thanks for sharing all the pictures and videos. The line to Caputa looks like I remember it - hard to tell the rail is even there in spots, due to the prairie grass taking over. Guess as long as the track is still there, there is always hope...

MILW had a lot of branch lines in SD, many seeming to go miles and miles to nowhere (lines to Faith and DuPree come to mind).

There was also another great website out there with many pix of the Trans-Missouri division, across northern SD and into Montana. Unfortunately the main site is no longer accessible, although a Google search seems to be able to link to parts of the old website and some of the pictures.
Northville Steve
Top

West of Murdo, SD along I-90 there are many signs about the "ghost town" called Okaton. Okaton is just off the interstate on old US 16. There is an abandoned school, many houses, and buildings visible from the highway. When you exit here and go into the town, there is still and operating post office, store, and gas station. Across the old 16 grade is a classic grain elevator scene of decay and in the grass the railroad is still in place. 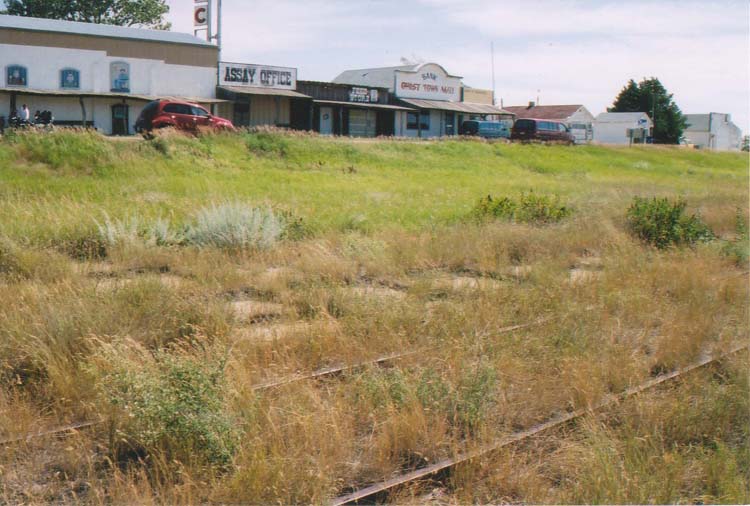 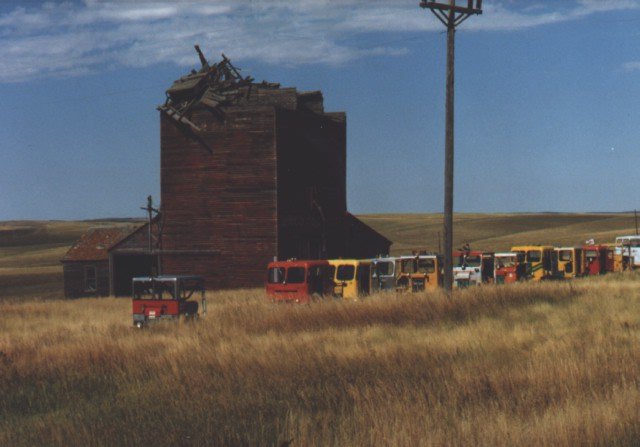 The elevator at Okaton visited by a speeder car group heading EB.

If you like this sort of thing it is worth a few minutes to stop here.
"If I Harp at you, it is only to Spur you on!
Top

I love fossil hunting. In fact I'm going with a small group to follow the old GTW PO&N tomorrow 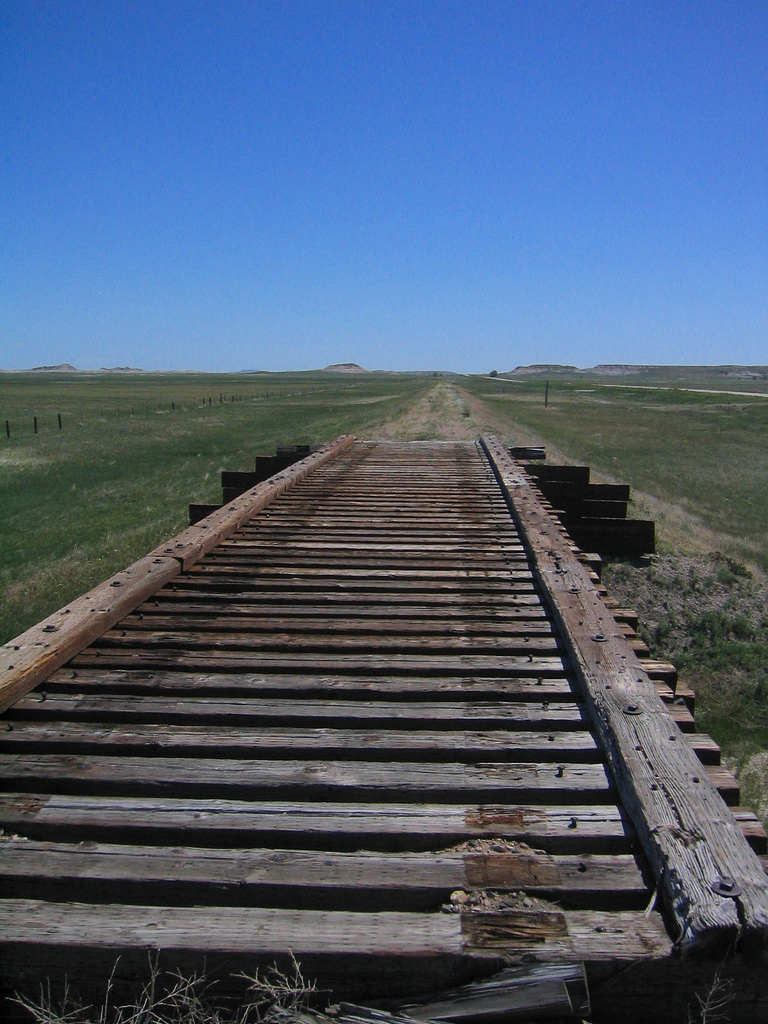 Looking east down the old grade running through the Badlands National Park along SD Hwy44 is to the far right. 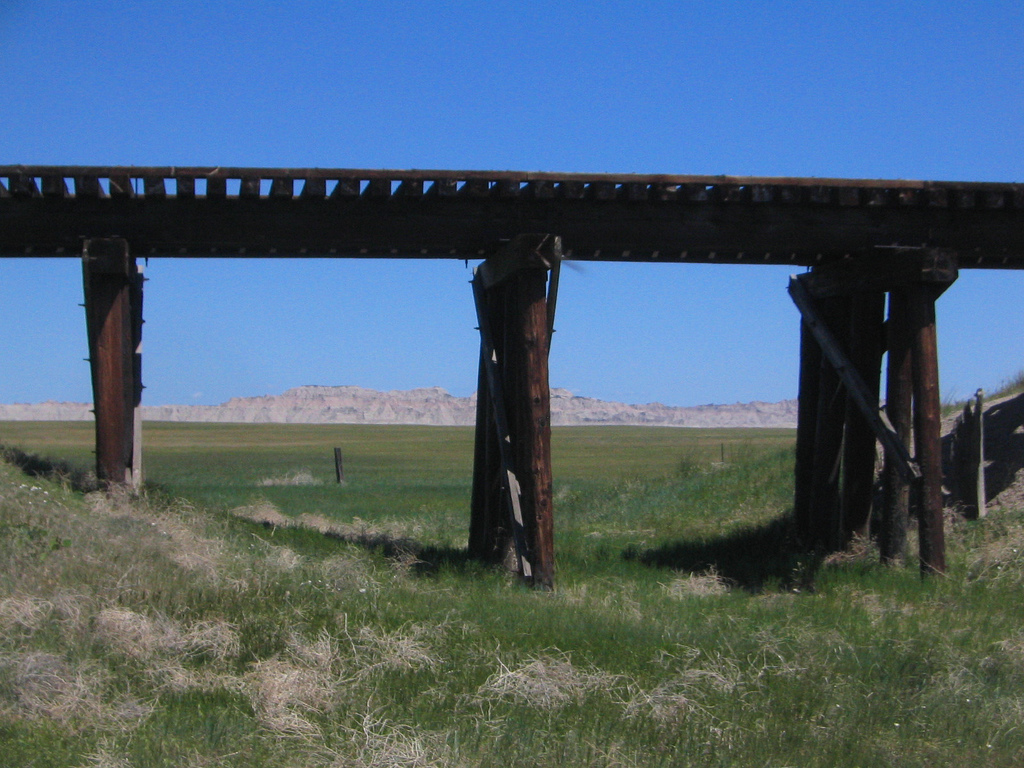 Sureal eroded ridges of the Bandland loom in the distance. Imagine the thrill of passengers viewing the scenery from as the train from Sioux Falls headed west to Rapid City.

For further reading and great historic photographs pick up a copy of the Rick Mills book, "The Milwuakee Road in Dakota" 1998 Battle Creek Pub. Co. ISBN 0-96115321-4-9

Books gives the story of the MR lines in the Dakota through many B/W and color photos along with text from construction through abandonment.
"If I Harp at you, it is only to Spur you on!
Top

Rick Mills has a couple of great other books on SD railroads out there that I managed to pick up at the gift shop at the Black Hills Central ("1880 Train").
-Railroading in the Land of Infinite Variety (A History of South Dakota's Railroads) (1990). There is even a color picture of that same collapsing elevator in Okaton - Bingo Grain Co, and a photo of the first DSRC train into Kadoka in 1988 (snapped by Greg Bunce, now of the E&LS).
-A High Line Scrapbook (The Burlington's Branch to Deadwood) (1986). That line was abandoned in 1983 and is now the Mickelson (Rail)Trail.
Northville Steve
Top

The Milwaukee Road tracks in Rapid City are still in place where it joined the former C&NW. Today the Dakota Minnesota and Eastern operates the former C&NW-MR trackage in the area.
DM&E uses the former MR yard at Rapid City for storage. Tracks are in place and used for approx 1/4 mile from junction switch for hopper storage. 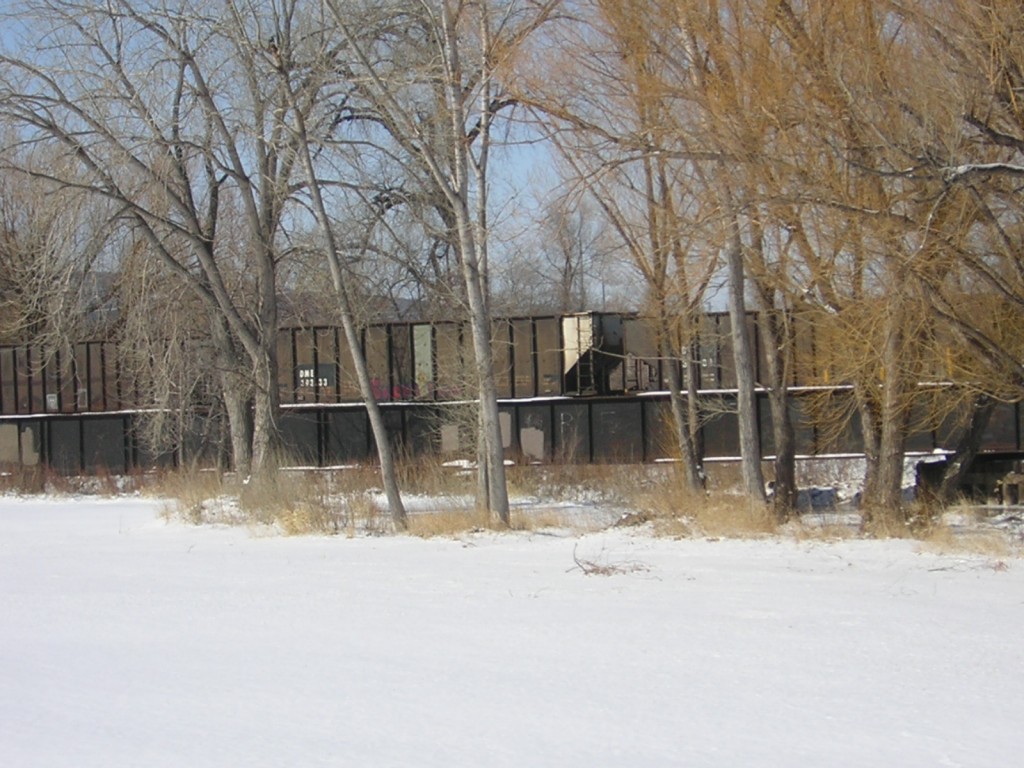 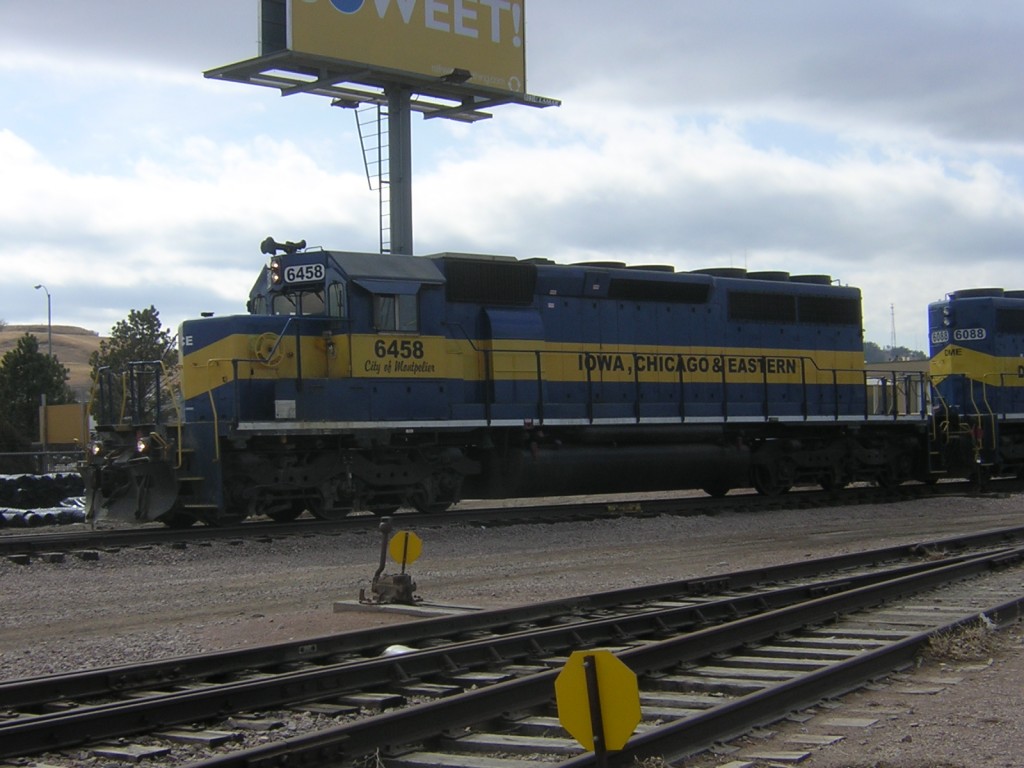 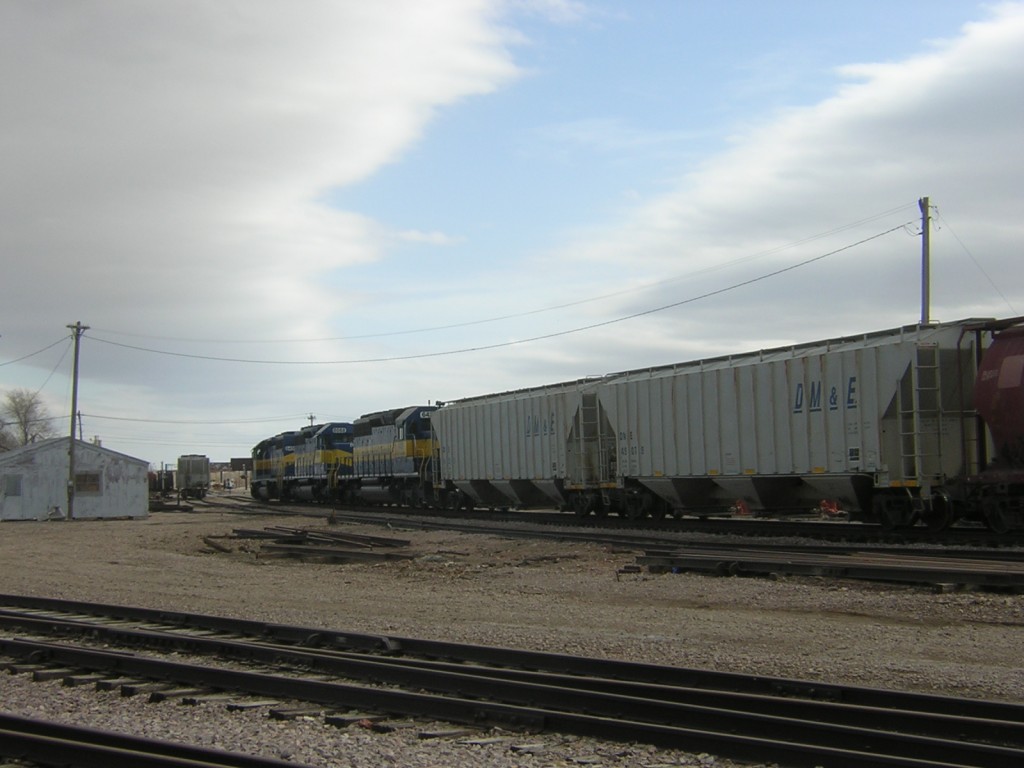 Old Milwaukee Road tracks diverge at the bottom of the above two pictures from the former C&NW operated by DM&E while Bentonite train passes junction. DM&E uses the former MR yard here for storage. 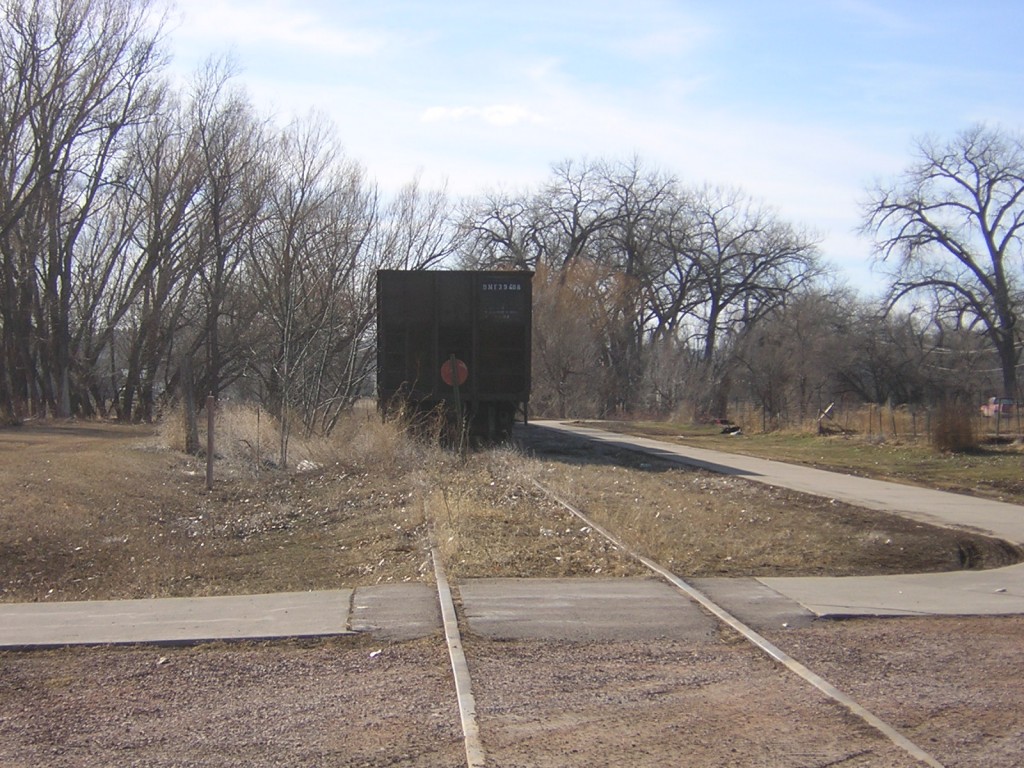 End of the MR at Rapid City. Beyond this sign post the tracks are mostly in place to Caputa but not used. 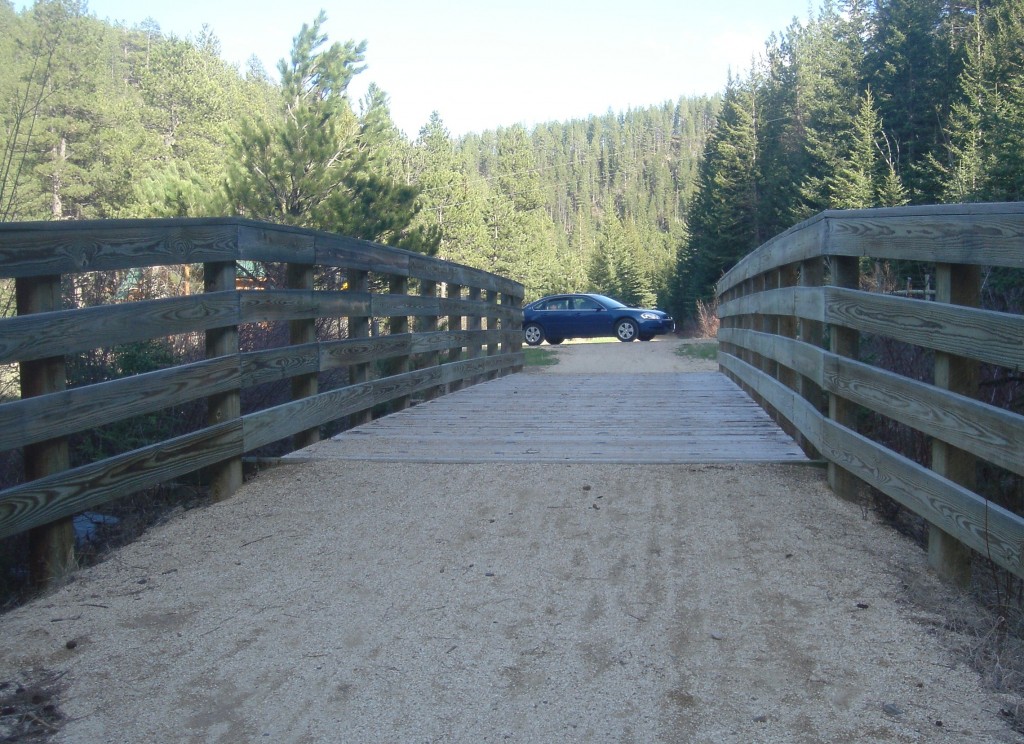 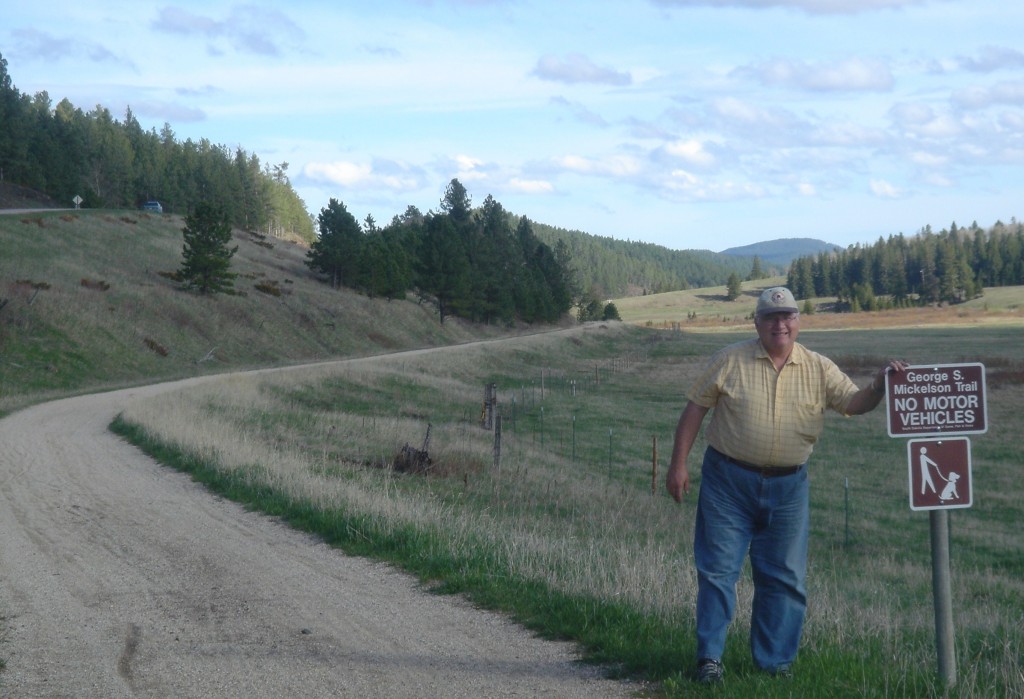 A long view of the trail in the valley near Deerfield, SD.

http://www.sdgfp.info/parks/regions/nor ... prints.htm Support the trail with a John Crane print.
"If I Harp at you, it is only to Spur you on!
Top

http://www.keloland.com/News/EyeonKELOL ... m?Id=98717
Read about the 'Bridge to Nowhere' repair on the old Milwaukee grade between Rapid City and the Badlands Nat Park.
"If I Harp at you, it is only to Spur you on!
Top

Nice shot of a pair of DSRC SD7 units on p. 27 of the June issue of Trains.
Northville Steve
Top

Great picture of the Kadoka Depot. My father was station Agent there 1959 till 1975. He retired in 1975 and the station was closed.
Top

In Chamberlain right now. Yes the UP DD40X still sits with a lot of neglect 6925 is the unit number. Also in the dead line 3-SD7s 506,512 & 522 506 is in a white paint scheme City of Oacoma. Also two Alcos 213 an RS & 104 looks to be an S2 or S4. The only operable unit was on the road train Ozark Valley 1362 a CF7. 512 is in really good shape cosmetically. Don't know if any are operable but they have been sitting there for a good number of years. Thats all for now. Tomorrow the Rapid City, Pierre & Eastern . Also lots of 1st generation units in western Minnesota used at elevators. Saw GP-30 711 at Crystal Valley elevator Conrail SW 9330 at another ILLX 4659 GP10 at anotber. NS9594 sitting by itself on the UP main at Worthington with lights on and crew. Saw 12 UP SDs sitting on mains in Butterfield Mn. with trackwork ongoing today. New rail and ties being laid on that UP line north to Mankato. Lots of stored Covered hoppers, ethanol and tank cars being stored on branch lines around Mn./SD border off I-90.
Top

Alex Huff does live in Chamberlain and retired from Dakota Southern there. I got beautiful shots of RCP&E units at Wall SD. 5 SD-40s on road train. Lots of elevator owned/leased single units parked at outlying elevators along US -14 going east to Pierre got to Wahpeton/Breckenridge caught 4-RRV&W units there plus BNSF units. Now on the Staples Sub where track gangs have the railroad for the day. Double tracking going on between Big Lake/Becker, Darling/Lincoln and St. Cloud/Little Falls. $326 million dollars being spent in Minnesota on this project this year. Trains start getting the railroad late afternoon and evening.The old paper mill at Brainerd center cab unit was sitting outside the mill. FED EX is suppose to convert the mill for their use. Hope they keep the switcher. Staples yard is usually full during the day waiting on the track gangs.
Top
Post Reply
26 posts